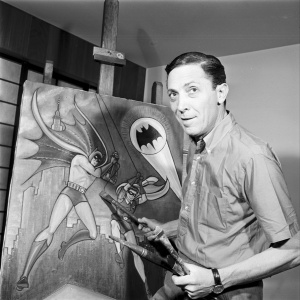 A Brief History Of Exploitation

It's certainly true that writers are highly visible in comics. But that isn't a particularly new development, and it certainly doesn't represent an uneven state of affairs for artists. The reality is that from the beginning of modern comics, creatives of both stripes have been wildly screwed over by a ruthless publishing environment that has constantly sought to ensure that creatives are either not credited, or not compensated to the extent their financial impact on their publisher - in 2012 alone, comic books sales were $715 million, while films based on comics earned $1.5 billion - should warrant.

Related to this, Batman was actually co-created by Bob Kane and Bill Finger. Kane was a bit more savvy than Siegel and Shuster and managed to get a "created by Bob Kane" credit on anything bat-related rather early, but he robbed Finger of any credit for his own contributions, which were, to put it mildly, substantial. Kane was also notable for frequent use of ghost artists, whose unheralded work allowed him to essentially goof off for years.

Skip ahead to the 1960s, when Marvel comics became a powerhouse thanks in large part to Jack Kirby, who co-created Iron Man, The Incredible Hulk, The Fantastic Four and many, many other characters. Marvel ended up losing Kirby however, perhaps the greatest artist of his era and the man who designed the original Marvel style, over a dispute with Stan Lee over the amount of credit Lee claimed for the characters they two created together. Kirby was very respected by his peers during his day. But today, Stan Lee is very famous, while Jack Kirby remains largely unknown outside people who tend to be especially knowledgeable about comics.

Skip ahead to the 1980s, when writers like Alan Moore and Frank Miller created work for DC and Marvel that did as much to help the comics medium be taken seriously as an art form as underground artists did in the 60s and 70s. Moore's contract with DC was an almost beautiful example of a legalistic mugging, promising that the rights to Watchmen would revert to him only in the event it ever went out of print.

By the late '80s and early '90s, the norm was still largely either contract-only deals, or creative freedom but no ownership, for even major talents. This included Neil Gaiman's Sandman series, as well as the eight artists who would in 1992 found Image, precisely so they could retain ownership of their work and a share of the profits their work generated.

The establishment of Image, far from being the high water mark, was actually the only water mark. The first time creators were prioritized to that degree, the publisher experienced significant success rather rapidly, but that success didn't end up changing the industry. Rather, as Harper notes, within a decade the industry had settled into what we see now: creatives exploited as though things had never changed at all. Image's policies affected only people hired at image, or at publishers who enacted similar policies, (which are rare.)

It was (and remains) a situation unlike pre-union movement auto-industry workers employed by Ford: well paid, but only so long as they kept their jobs. But automobiles became essential to the American way of life, making the people who built them essential too. Art, especially comic book art, has not.