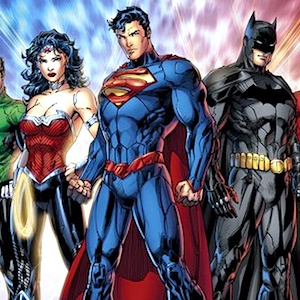 So How Bad Is It Now?

For those firmly ensconced in the protective bosom of a major publisher, things aren't entirely that bad. While specific numbers are hard to pin down, reportedly, DC and Marvel offer very competitive page rates in the $400-$600 range. That said, Marvel's policies noted above at least seem designed to reduce the power of individual artists. Likewise, since the launch of the New 52, all of DC's mainstream titles are drawn in the same style, the result being a new continuity in which every single character has the same face and the same anatomically distorted physique. There's sadly very little to distinguish Rags Morales' work on the first few issues of Action Comics, from Jim Lee's work on Justice League.

But far from anonymous, the artists involved in major productions by the big 2 are often as widely promoted as the writers. A review of the promotional emails I've received from Marvel in the last week bear this out. Some samples:

* Winter Soldier: The Bitter March #1: "Spinning out of the best-selling Captain America series, blockbuster writer Rick Remender and artist Roland Boschi craft a tale of action, adventure, and espionage that hast to be seen to be believed!"

These blurbs don't represent a full cross-section of industry marketing, but, while the work is indeed grueling, thankless and undervalued, it's difficult to agree that it's being done anonymously. If anything, the promotion of writer and artist duos is integral to selling many titles. Far be it from me to argue that the two biggest publishers are forces for good in comics, however. Both continue to rely fairly heavily on work-for-hire schemes, which means even breaking into the big time doesn't guarantee a comfortable living for long. And despite the existence of creator-owned imprints like Marvel's icon, the majority never enjoy ownership of their creations. But they do offer good rates and a chance at real, lasting exposure.

It's at the indie level where things are truly bad. One artist I spoke to, who preferred to remain anonymous, was forced to stop working on a classic title put out by a medium-sized publisher because the work required an enormous commitment of time for such low pay it didn't really cover his expenses, much less make up for work he wasn't able to do elsewhere. This artist's work was widely lauded and he was enthusiastic about the job, but the publishers were unwilling to consider even a minuscule raise in order to keep his services. This is the kind of story one hears again and again.

Another industry insider I spoke to noted that artists and writers working for smaller publishers are more likely to receive a low flat fee than a page rate. And those that do offer page rates significantly lowball the talent. Boom! Studios was singled out as particularly miserly: according to more than one source, the company pays around $200 for covers, and typically offers page rates between $30-$100, for work on its successful licensed comics such as Adventure Time. Everyone I spoke to preferred to remain anonymous, but artist Scott Shaw went public with complaints about the studio's rates last year that solidly back up what I was told.

Lacking the actual financial filings of publishers, it's difficult to know precisely how much money each has to work with. But recent years have seen impressive earnings - in 2012, the comics industry enjoyed its most profitable year since the 90s heyday, with $700-$730 million in sales for the industry as a whole. To be sure, most of that can be split between the big two, but with smaller publishers like Boom! Studios inking lucrative deals with film studios, it's likely there's more money to go around than most artists are led to believe.