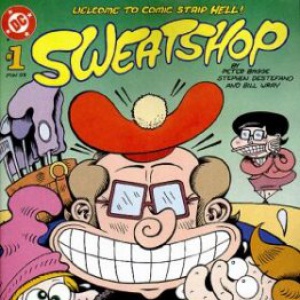 What Can Be Done?

The founding of Image might have been a momentous event, but greater ownership of one's creations won't necessarily fix the problems faced by professionals. Image's Jim Zubkavich revealed in 2012 that he earns, at best, around $32.00 per page for his creator-owned hit comic SKULL-KICKERS. Creator ownership is an objective that is good in and of itself, but it's not a guaranteed pathway to a self-sustaining life.

One reason the current environment is so bad is that there is no standard of pay. Artists with higher prestige and fame can command higher pay, but because few people know how much a publisher is likely to offer, negotiation can be difficult. This divide and conquer framework benefits publishers immensely, especially when the idea persists that writers and artists are somehow at odds with one another.

Changes certainly need to happen at the publisher level. While publishers are indeed earning healthy profits, they're doing so mainly by raising single-issue prices rather than bringing in new readers. Even with Marvel's double-shipping, more earnings brought in with fewer readers means more money made for fewer costs. No doubt it's creatives bearing the brunt of those savings. Historically, the best way to get management to change policies, barring laws that protect the rights of labor, is collective action.

Right now, comic artists and writers lack any kind of effective advocacy organizations like unions, or something similar to the Hollywood guild system. Unfortunately, there may be problems beyond common business practices preventing that from happening. Comics legend Rob Liefeld weighed in on this issue himself, and he puts the blame squarely on the shoulders of the artists themselves. "It's a self-inflicted wound. Artists allowed this," Leifeld said on Twitter. "The majority of "important" artists from 2000-2010 were content to play "who has the best freelance gig at the big 2" that ended as expected. There was a period where a group of artists almost mustered the courage to break free but in-fighting and demand for upfront $ fractured it."

Sequential has a detailed look at historic attempts to organize the industry that seems to support what Liefeld says. Repeated attempts to organize comic industry creatives have collapsed, and recent behavior suggests this will continue to be the case. This doesn't have to determine how things will proceed in the future. Many people I spoke to expressed skepticism about unions as a concept, but there's evidence this isn't as big an issue for for creatives just starting out as it is for those in their thirties and older.

However this is solved, it's going to require more than pitting creatives against one another. At minimum, writers don't succeed at the expense of artists and the two groups' interests are linked. In the absence of an immediate solution, the readers aren't impotent. Just remember that behind every great comic you're reading, there's probably a team of overworked and underpaid people who made it happen. If readers care, maybe it's time they also started asking publishers why that is.