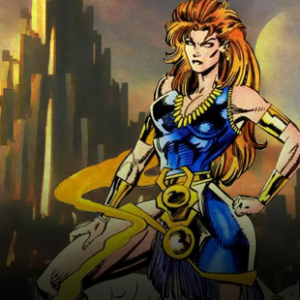 More than just the vengeful stalker from The Mighty Thor, Lorelei's origins are in a legitimately tragic real-life folk tale. Also, we discuss the time Loki had sex with a horse.

I'm not going to lie. At this point, I'm beginning to think Marvel's Agents of S.H.I.E.L.D. is ultimately unsalvageable. The season has notable mainly for being directed, edited and choreographed as though its producers think that 4:3 aspect ratio and 1990-era production values are still the televised standard. It also contains what might be the most painfully incompetent character shilling since Scrappy Doo - I'm talking about Skye, of course, aka the "let's grind every episode to a halt so that every other character can talk about how unique, special, talented and amazing she is" character. And even if these things weren't problems, the fact that all ties to the larger Marvel Cinematic Universe have so far been insultingly superficial would be enough to exhaust the patience of even the most dedicated Marvel fanperson.

But at the conclusion of last week's otherwise painfully mediocre episode, things threatened to get interesting again. An Asgardian criminal named Lorelei, who has the power to ensorcel men to do her bidding, dropped into the California desert and turned a human man into her slave, setting up something called Marvel's Agents of S.H.I.E.L.D.: Uprising. So far it mainly justifies a guest appearance by Jaimie Alexander, reprising her role as Lady Sif from the Thor films, but for the first time since the Deathlok reveal, the show is once again getting a distinct Marvel super-character with potential beyond one-off appearances.

So who is this oversexed hypnotist-goddess-criminal mastermind? In comics, she's a petulant stalker with a constant thirst for power who generally finds herself allied with some of the Marvel Universe's more unsavory gods and villains. But as it turns out, the source material Marvel used is a tragic romance that casts her as the victim of a capricious, male-dominated world. Let's take a closer look, shall we? 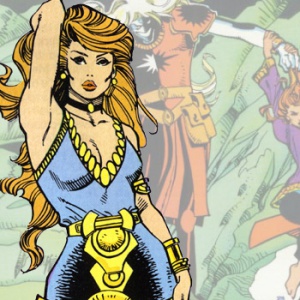 Introduced in 1983 in The Mighty Thor #337, Lorelei's Marvel comics persona can be boiled down to one concept: ladies are trouble with capital 'T' and that rhymes with 'b' which stands for breasts, amirite guys?

I kid, but only slightly. The younger sister of Amora The Enchantress, Lorelei is an Asgardian goddess with a particular talent for magic who generally plots to make herself queen of Asgard. However, unlike her sister (or Loki for that matter), Lorelei has focused her magical education solely on romantic and sexual powers. She has the ability to seduce and control any man, mortal or immortal, and since she's also bitter and spiteful, she causes enormous trouble wherever she goes. It's never quite consistent, but she tends to use both her natural ability and a copious amount love potions. And in all instances, she veers dangerously close to being a crazy stalker.

In her official backstory, Lorelei first came to the attention of Marvel's Asgardians after winning a hunting contest via use of her (sigh) feminine wiles. This impressed Loki, who saw in her as a potential weapon against Thor, so he took her under his wing and, promising to help her win the love of Thor, made her his henchwoman. This leads to a silly, complicated series of events in which Lorelei travels to New York, puts herself in apparent danger in order to catch Thor's eye, succeeds, then uses a love potion to ensure that Thor falls for her, is later kidnapped by Malekith the Accursed and subsequently rescued by Thor. Somewhere in the middle of this, a war between some random demons and Asgard breaks out, during which Lorelei is tricked by her sister into falling in love with Loki, who spurns her affections, which naturally inflicts upon her the pain she'd been inflicting on everyone else.

Lorelei eventually sacrifices herself to save Baldur, and subsequently goes to the Norse afterlife. Fortunately, since this is Marvel, no one need ever stay dead, and she is soon brought back to life by the Egyptian god Seth, because sure, ok, why not. After dying a second time, she again manages to come back to life and, because reasons, forms an alliance with Pluto, ruler of the Greco-Roman afterlife. Naturally, she causes more problems, and ultimately disappears after being the apparent sole survivor of Asgard's destruction during Ragnarok.

At best, Lorelei is a complex woman motivated by sibling rivalry and personal ambition. At worst, she's a troubling retread of the madonna/whore complex that has made so many female comics characters difficult to take in light of social progress in the last 40 years or so. Even so, like many characters with unfortunate implications underpinning their origins, Lorelei has enormous potential to be more than a magical femme fatale. We'll find out tonight if Agents of S.H.I.E.L.D. manages take advantage of that potential.

But, like most of Marvel's gods and goddesses (but curiously, not her sister Amara), Lorelei is based on actual mythology (of a kind), in this case German folklore. And despite her rather juvenile embodiment of vagina dentata in the comics, in the story on which the character is based, she is a sympathetic, tragic figure, unlucky in love and doomed to die unfulfilled.