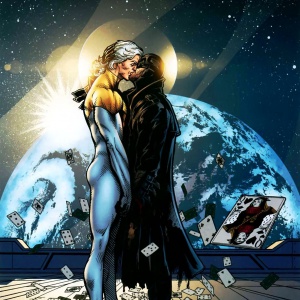 To mark the passing of a bigot, let's look at how gay people have fared on the pages of American comic books.

Sometimes, writing a sentence can be an absolute joy. For example, this sentence: It was announced yesterday that Fred Phelps, the founder of anti-gay hate group Westboro Baptist Church, died of natural causes at 84 years old. However, I come not to bury Fred Phelps, but to laugh about the fact that by any reasonable measure, his life was an astounding failure.

As I write this, same sex marriage is fully legal in 17 states, plus the District of Columbia, and several lawsuits winding their way through the appellate courts have the potential to expand equal marriage rights to all fifty states. And that's not even taking into account the fact that the notion of equal rights for the LGBT community has become so mainstream, even a majority of young republicans support same sex marriage. When history remembers Phelps at all, it's going to remember him as the "god hates fags" guy who succeeded only in convincing people on the fence to support gay rights.

Having one's life's work remembered not only as hateful, but also a pitiful failure? That's one hell of a legacy. To commemorate that legacy, let's take a look at 5 pivotal moments from comics history that encapsulate the successes and setbacks the LGBT community has had on the pages of American comic books.

Nope, Wonder Woman isn't gay. But the story behind her creation proves that even as early as the 1940s, American culture was already undergoing vast social changes that would go on to make Fred Phelps' pathetic hatemongering pointless.

Wonder Woman creator William Moulton Marston was a psychologist and writer credited with inventing a precursor to the polygraph test. He also lived a shockingly unconventional life that was, without hyperbole, decades ahead of its time. Married to fellow-psychologist Elizabeth Holloway Marston (herself also having contributed to his invention), the couple actually lived in a polyamorous relationship with Olive Byrne, a former student of William's, that appears to have been romantic between all three people.

William, a vocal proponent of an early form of feminism that veered close to a belief in the superiority of women, created Wonder Woman as a contrast to the square-jawed brawlers that dominated (and still dominate) comics in that she would defeat her enemies with the power of (strong, authoritative) love. With input from Olive and Elizabeth, he notably based the character in part on the two of them. He also incorporated clear themes of bondage and submission, particularly of men submitting themselves to women. And true to his somewhat oddball ideas, his Wonder Woman stories are also notable for clear, though subtle moral lessons involving the power of love - especially erotic love - to conquer evil.

Decades later, Wonder Woman would go on to influence not only young feminists, but young gay people as well, including comics writer Allan Heinberg and artist Phil Jimenez, both of whom have worked on Wonder Woman comics. But in the years after Marston's death in 1947, DC comics set about drastically downplaying and removing most of his psychosexual concepts from the series. They couldn't get rid of it all, of course, and Wonder Woman's basic design and backstory, not to mention her lasso of truth, stuck around. By the 1950s, her strength and independence were used by critics to claim she was a lesbian. Slurring gays and women's equality with a single insult is tough to pull off, but Americans just knew how to work harder in the 1950s, I guess. Good thing no one was there to wave around "God Hates Invisible Jets" protests signs.