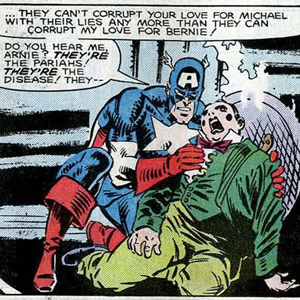 Captain America Works Because He Isn't A Dick

It's true that Captain America seems kind of corny at face value. He is after all wearing a red, white, and blue costume and never seems to swear, treat people with disrespect, or lose his cool. In The Winter Solider, when Nick Fury tells the Captain that "SHIELD takes the world as it is," that things are far more black and white than they were in his day, it's easy to believe him, because we all look back on the World War II era as a much less complicated time. But it really wasn't the case, was it? Steve Rogers grew up in an era when segregation was not only legal but required by law in a large section of the country, and yet the Nazis were our arch enemies. And this is only the most obvious of the troubling contradictions of the era.

But in The First Avenger, when he's asked if he wants to kill nazis, he says "I don't want to kill anyone. I don't like bullies. I don't care where they come from." That line is an apt summation of the character's long history, and it's part of why he's such a nice guy. There's no point in being a dick to people for no reason - doing so doesn't make you interesting, it makes you a bully, just like every single version of Captain America who is a prick. Further, much like Superman (by the way,) Cap understands something about the value of leadership - it's better to inspire people to follow you than it is to scare them into submission. Being decent isn't evidence of a lack of personality, it's a burden to be shouldered with care and responsibility, and it's something he does in fact struggle with. And it's central to understanding him.

Maybe the problem Riesman is having with the optimistic portrayal of Captain America is that he wants him to be a satirical, if not outright cynical evisceration of US Foreign policy. At least, I have to assume that's why he hailed the execrable Ultimates universe-version of Captain America as a shining example of how to do the character right. Notably, that version is an aggressive jingoist who gladly signs on the invasion of Iraq, later invades Iran, drops sexist epithets willy nilly and projects a xenophobic attitude that even includes taking cheap shots at France.

Personally, I think that version of the character fucking sucks. It also completely misunderstands the character. Captain America has typically been a defender of American values, not American power. Hell, he enjoys the distinction of being the very first mainstream super hero to openly defend gay rights, and that's in addition to the fact his enemies are quite often shadowy authoritarian fanatics, white supremacists and the like. More often than not, he's saving America from itself rather than from external threats.

The Captain is far more interesting because he strives to be open minded and free thinking despite the crazy shit he's experienced. It takes real character to decide that having been on the right side once doesn't make you right all the time, especially when you're surrounded by sycophants telling you the opposite. That's the source of far more realistic tension and character development than any amount of needless douchebagging.

More Importantly, It's Been Done

Captain America doesn't have to be your favorite Super Hero - he isn't mine - in order to like what he stands for, how he's depicted, and the struggles specific to him. Frankly, people complaining that Captain America is too nice, that he doesn't work unless he's an asshole, are actually unhappy because Captain America is Captain America. If you reject the idea that no character can work if they're fundamentally decent and generally nice, that's a conversation I'd be willing to have (even though I'd think you're a child). If you think a particular character simply does not work on any level, so long as you can demonstrate with actual evidence and not just head canon, then that's fair game too. But being unhappy that a character has been portrayed largely as they were imagined isn't criticism, it's projection of your personal fan fiction. It's as pointless as being annoyed with JK Rowling because Ron didn't have a butter beer-induced hook up with Draco Malfoy.

But of course, if people are unhappy with an optimistic portrayal of Captain America, they're in luck. As it turns out, comic book history is filled to bursting with artists and writers who took the concept of America's avatar and tweaked it. Why not see for yourself, and then ask yourself, would you rather have Steve Rogers, or Captain America: Commie Smasher?