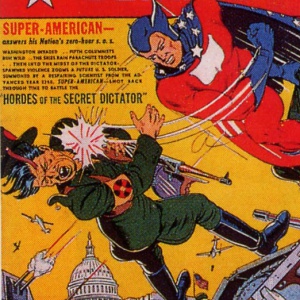 The non-copyright infringing, underwear-wearing hero from the 24th century is a joyous thing to behold.

Despite the threat of global domination by fascists bent on enslaving half the world and killing the other half, not to mention tens of millions dead and eventually, the first and only wartime use of nuclear weapons, World War II was in many ways a much more innocent time. At least when it came to our popular art, anyway. The wartime years were chock full of songs, movies, comics, books and so forth that unapologetically (and for the most part, apolitically) cheered on the war effort, encouraged national unity and also provided some rather fun, morale-boosting distraction in an era plagued by fear and uncertainty.

Superman and Batman and, well, everyone got in on the act, fighting Nazis, defending the American way, and so on, ultimately leading to the creation of a literal defender of America, Captain America. The success of these titles clearly demonstrated there was a huge market to be filled, and if there's anything that defines America, it's a willingness to make sure a market is filled until it can't possibly hold anything in. And so emerged Fight Comics, an anthology title of sorts from publisher Fiction House. There's no other way to put it: Fight Comics was the 1940s comic book equivalent of movies released to capitalize on blockbusters that have suspiciously similar titles and themes. From 1940 to 1954, if it was being done by a publisher like DC or Timely (later Marvel), Fight Comics would have their own version of it. 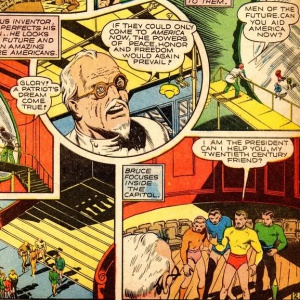 Despite this, Fight Comics actually released some interesting stuff covering every popular genre, from war comics, spy comics, adventure comics, even "jungle" comics. A particularly awesome - and in hindsight, hilariously racist - standout is Tiger Girl, a Tarzan meets Wonder Woman type whose adventures confused India with Africa and Sikh with Hindu, and featured a white woman battling evil Arabs. (Yeaahhh.) But of course they also had patriotic super hero comics, which brings us to Super-American, perhaps the best example of not even bothering to think past the first draft when it comes to naming a character ever.

Super-American is exactly what it sounds like: A super-powered American citizen. Kind of like if I became a super hero and called myself "Super Ross." First appearing on the pages of Fight Comics #15, some six months after the debut of Captain America, the story of Super-American is pure pulp science fiction in the best possible way. In 1941, a brilliant scientist named Allan Bruce is very worried about the ongoing war in Europe and desperate to find a way to help America prevail against its totalitarian enemies. Somehow, he hadn't been snatched up by the US Government to work on top secret research projects, and so he invents a time machine (which he calls The Chronopticon, possibly the best name ever for a time machine), which allows him to look into the future and communicate with the people who lived there. He quickly discovers that for some reason, everyone has superpowers and dresses like super heroes.