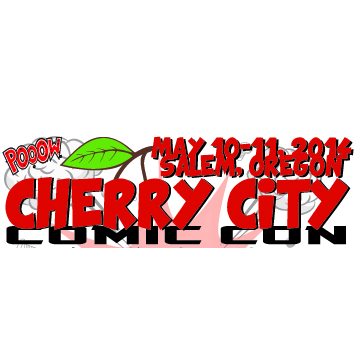 If you haven't heard of Cherry City Comic Con, you can be forgiven. The new convention, which launches in Salem, Oregon, on May 10 and 11, is the first of its kind in the region, and it promises to bring together Oregon's comics, gaming, cosplay, movies and tv fandoms for an event that emphasizes local talent and community. By that description, it sounds like a net positive for both fandom in general, and for the city of Salem.

Unfortunately, an initially unintentional hostile reaction to a customer inquiry about the ratio of male and female cosplay images has shined a bright light on the convention, with the ensuing and very public controversy now threatening to overshadow Cherry City Comic Con itself. What follows is an enormously convoluted story that almost defies belief, but one that offers important lessons about unexamined sexism in the geek community, or at least thinking before you speak.

Strap in, readers. Headaches ahead.

On April 27, with just two weeks to go before the convention's start, several cosplay images were posted to the official CCCC Facebook page. While the images were a cross section of costumes and cosplayers, female cosplayers were more heavily featured than male. A CCCC attendee named Chana, concerned about the imbalance as well as the potentially un-family friendly nature of the photos - the convention expressly advertises itself as family friendly - posted a comment requesting more male cosplay images.

Normally, this would be where the story ends. Whether or not one thinks the complaint had merit, it's an easy matter to acknowledge the concern and address it to the customer's satisfaction. That is... not what happened. Someone managing CCCC's Facebook page, likely convention owner Mark Martin, responded to the inquiry defensively. At first attempting to diffuse the matter with humor, the exchange quickly descended into a curt, but unmistakably sexist dismissal of the concerns, and Chana quickly decided to ask for a refund. You can see the exchange here in this screenshot: 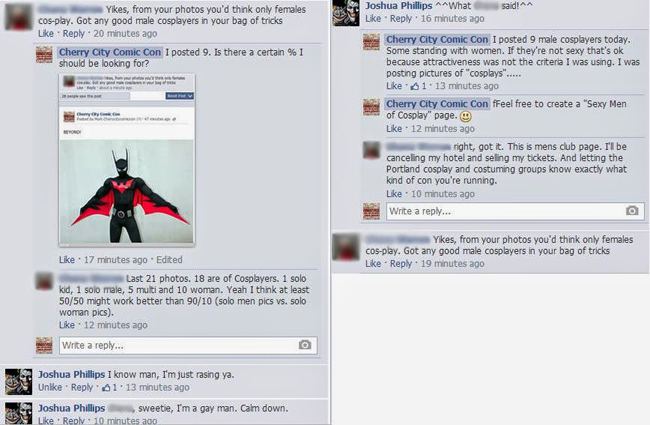 Chana then privately contacted CCCC through the organization's Facebook page in order to request her refund. While not the best outcome, the matter could at this point have remained private, but unfortunately, Martin took to his personal Facebook page, where he quoted Chana's refund request, including her first name, and proceeded to mock her complaints angrily. Making things worse, Martin's friends joined in.

At this point, Dallas-based cosplayer and burlesque artist Black Mariah became involved. While she does not know Mark Martin or other persons associated with the convention personally, as a prominent cosplayer she received and accepted a friend request from Martin at some point prior to the posting of Chana's refund request. When Mariah saw this post, she left a comment that, in her words, was "a non inflammatory, non offensive reasonably languages (sic) response about how this post looks to other women cosplayers". She was subsequently blocked by Martin, and the comment was deleted.

Mariah had taken a screenshot of Martin's original post, however - you can see it here - and brought it to the attention of friend and fellow cosplayer Taffeta Darling. Darling, known for drawing attention to instances of sexism in the geek community, quickly shared a screenshot of the post with her friends and posted it to her Facebook. Martin, alas, contacted her personally and responded by calling Darling a sexist, then began posting to her Facebook page using multiple aliases (also known as "sockpuppets"), in which he created a sock puppet - he pretended to be someone else - to speak in his defense. (Proof of this here.)

If these actions were designed to defuse the situation, they failed. Taffeta Darling had also talked about the incident at length via social media, and after the slew of wall posts now attributed to Mark Martin, she also made public their private exchange. With the matter garnering increasing attention, the website Strong and Free spoke to a CCCC representative, who claimed to be named "Cassie." "Cassie" was as dismissive of the incident as Mark had been both as himself, and using his various aliases. Indeed, "she" had even used identical language in some instances. More complaints followed - you can see many of them still posted to CCCC's Facebook wall. Whatever Martin's original intent, he and his organization were now becoming widely seen as hostile to cosplayers, and dismissive of the concerns of women.