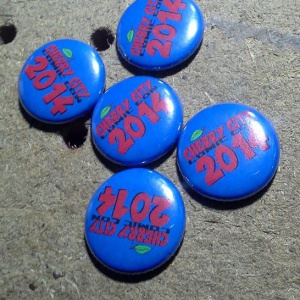 By Tuesday evening, what began as a trivial disagreement about cosplayers in a photo gallery had turned into a full blown PR crisis for Cherry City Comic Con.

Martin finally issued a brief apology late Tuesday evening. This was an important first step, but it was critically undermined by subsequent actions. First, a protracted effort was made to scrub Facebook of much of the communication associated with the issue. Martin deleted comments made using his aliases, which was bad enough, but then attempted to impugn Strong and Free, outright denying that anyone named "Cassie" worked for the organization and accusing the site of fabricating the entire conversation. If you've been reading this far, then you can probably guess that Strong and Free took a screen shot of the conversation in question. And you'd be right.

Around this time, Martin also resumed posting to Taffeta Darling's Facebook page, using screenshots (this time with Chana's name blocked out) to plead his case. At the same time, someone - it is impossible to determine who - reported a screenshot of her original conversation with Martin, which Darling had posted to her Facebook wall, as threatening or inappropriate, and it was briefly taken down. By Wednesday afternoon, an online consensus was emerging that Cherry City Comic Con was a hostile space for cosplayers and for women in particular. A nightmare situation for a fledgling convention that hasn't even celebrated its first event.

By yesterday, the full extent of this nightmare was apparent. Spurred by this, Mark Martin, for his part, now seems genuinely sorry about the matter, and has taken full responsibility for it. While he declined to be interviewed for this article, he provided The Escapist with a statement, posted here in full:

My name is Mark, the individual in question. I own the CCCC and It was my actions that lead to this unfortunate event. I posted on my personal profile my frustration over the situation. When one has invested their time, money and heart into something- when you feel like it is being attacked, you don't always handle it the best way, and I did not. It was not my intention to cause harm but I did and for that I'm truly very sorry.

We are trying to create a convention where we all can share our interests, passions, and loves.

We do have a privacy and harassment policy located here: (this page is being updated as I write this but should be live by 9pm this evening)

As a convention we are prepared to review, as a team, harassment policies and to ensure that myself and others on the team will never act in such a way again. And we welcome further suggestions on how we can make our convention a place for everyone to enjoy!

I say that I completely apologize for the way I behaved. It was not the best way to handle it and I am ashamed of my actions and how it affected people's opinion of the convention and myself. At this point all we can do now is show people how our convention is a place to bring their families to all share their interests. On a personal level all I can do is show how my outburst was a singular act that is no way a statement of my character.

This statement may not be enough for cosplayers and fans put off by the whole affair, but at least, as of this writing, it seems the convention intends to make amends. That alone may be enough reason to give benefit of the doubt.