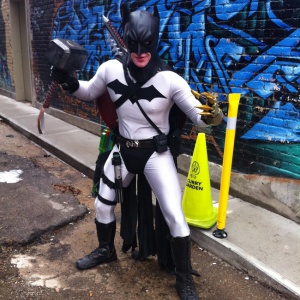 The concept quickly took off, with each store seeing unprecedented growth when Free Comic Book Day. "The first year all the stores sort've did it on their own, and it was okay," said Vandenberg's husband and business partner Gord Mood, "but once we started doing the crossover together the numbers just exploded." In 2013, the Comic Shop Crossover collected over 2000 completed passports, which doesn't even account for customers who visited one or two locations before moving on. London Public Library also joined the event in recent years, not just to distribute free comics but to host the city's costume contest.

What's most impressive however is the range of comic book fans attending, especially youth and teenagers. Each comic shop noted that while the stereotypical comic collector are 30-year old males, kids and women now make up significant portions of their audience, even outside of Free Comic Book Day. "There's no typical customer," said Worlds Away's Brad Ashton-Haiste, who serves "kids to people over 60-70". Wisemen describes an even split of men and women who visit Heroes, while Tim Morris at Comic Book Collector says that long-time customers are now bringing their children with them.

Neo Tokyo owner Rob Timberland adds that this influx will be a massive boon to the industry going forward. "For a long time people weren't terribly optimistic about the superhero side of Western comics," he explains. "With Avengers and Spider-Man and all these movies, we've seen the introduction of a whole new generation, and that's necessary, that's essential, for success in the long-term."

The industry's future aside, London comic book fans are just incredibly happy to have an event of their own. Its enthusiastic geek culture, periodically refreshed by students attending the local university and colleges, mean a mix of new and old faces each year. In the same day, one might see a family of Avengers, a fully mobile Dalek, and a woman quietly crocheting world maps from Super Mario Bros. 3. One Batman fan sometimes parks a working Adam West-themed Batmobile he constructed outside of Comic Book Collector, much to the delight of visitors and car enthusiasts.

At the moment, Free Comic Book Day is the closest London gets to having its own comic convention, but thankfully that's about to change. Buoyed by the success of Free Comic Book Day, LA Mood is helping launch Forest City Comicon this October, with an emphasis on costumes, panels, board games, and video game tournaments. Very soon, London could find itself attracting cosplayers and comic fans from Toronto instead of the other way around, and it's largely thanks to the collaboration between these stores.

"No other city does what we do in getting together for Free Comic Book Day," Vandenberg said. "London's unique that way."

To find out more, visit the shops profiled in this article: The Comic Book Collector, Heroes Comics, LA Mood Comics & Games, Worlds Away, and Neo Tokyo.