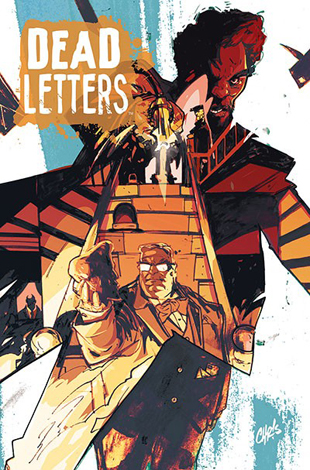 Sam Whistler is a typical noir hero, with questionable morals, a talent for violence, and a missing woman to find. What sets him apart? He and everyone else in Dead Letters, the ongoing noir series from BOOM! Studios, created by writer Christopher Sebela, with art by Chris Visions and colors by Ruth Redmond, is dead. Sam is in a way station for souls, a sort of purgatory that its residents simply call "Here". With little memory of the life he had before waking up Here, Sam finds himself in a middle of a gang war. His bloody reputation in life precedes him, however, and the warring factions start things off vying for him to join them.

Dead Letters #1 saw a gunfight and a car chase end with Sam in the hands of Ma and Jones, the two gang leaders that run the city under a tenuous truce. Ma is a hardhearted ringleader to a team of thugs dressed like circus performers, while Jones is the stylish but less competent head of a gang whose uniform is a classy red suit, tie, and bowler hat. With an eye for self-preservation, Sam opts for Jones' crew, and the gang immediately tests him with a heist to grab a supply truck - supplies we later learn are coming from the man upstairs.

The heist goes bad with a little help from Sam, and as he shoots his away out of the hands of the gangsters, we get the first hint that things aren't quite right - the dead gangsters don't stay down. Rescue comes in the form of Maia, who arrives in a big yellow taxi to whisk Sam away from the scene. Maia brings Sam up to speed on where he is, and offers him a job. Beryl, a woman who was working to broker a peace between Jones, Ma, and Maia, has gone missing. Oh, and Maia? She works for God.

In Dead Letters #2, Sam is beginning to investigate what remains of Beryl's work in order to find out what happened to her. We get a little more information about Here from Maia, who narrates a series of memories delivered to Sam through a strange, mind-bending artifact. We also learn that the city of Here developed because the volume of souls who fell somewhere between villainy and sainthood was much larger than expected. Most are not ready to be judged and move on to the next step, whatever that may be, so they live out imitation second lives.

Sam begins walking the beats that Beryl walked, talking to those who knew her and pushing for information. Sam meets Dural, Beryl's husband during life, a bartender under the thumb of Jones' gang Here. Dural talks, after some insistence, about the last time Beryl spoke to him. Whatever happened to Beryl, the gangs, the deserts, and something or someone called Methuselahs had something to do with it. Sam doesn't get much more out of Dural, because Jones' gangsters show up and fill the bar with gunfire. Like Beryl before him, Sam ends up in the hands of the gangsters, and he will need to use every trick he's got to keep them off balance and get to the bottom of Beryl's disappearance. 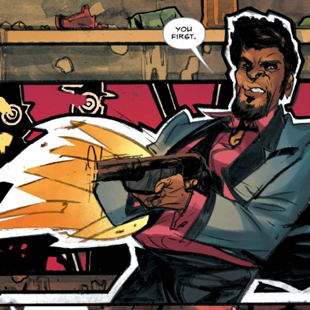 For a story set in the afterlife, Sebela's purgatory seems a little too eager to distance itself from religion. When Sam asks if souls leave here after judgement go to Heaven or Hell, Maia scolds him, saying, "Stop making this religious, Sam. It's not about good or evil, it's about development." The first two issues aren't devoid of Judeo-Christian imagery, but it is muted. A bible rests on the bedside table where Sam awakes, statues of angels stand with trumpets along the streets or perch on columns, and a tiny cartoonish devil graces the menu of a local diner. I can't tell yet whether Sebela and Visions are deliberately downplaying the religious tones to leave their own mythos room to grow, or simply setting religion to the side. I hope it's the former.

If you go into Dead Letters expecting clean lines and superhero colours, the art could discourage you. Visions' work has a hazy, fluid quality to it, with fuzzy edges and sketchy lines supporting the confusion faced by Sam. The sketchy style makes everything feel wild and reckless, and Visions' use of mirrors, shadows, reflections, and Polaroid photographs within panels and as part of the composition adds to a sense of intangibleness. Panels fade into each other dynamically, but the blending of edges can sometimes distract from the scene. The art style reminds me in some ways of both Sin City and Samurai Champloo. We also get a sense that perhaps Sam isn't the most reliable narrator. His thoughts are delivered on scraps of paper or tape, barely hanging on. Little background details like the letters on a rotary phone spelling out "WHO ARE YOU" suggest our narrator's grip on reality may not be strong.

Redmond's colors really pull the issues together. The restricted colour palette of blacks, reds, and blues, emphasizes the opposing forces at work, between whoever is up above and down below, between Jones and Ma, and within Sam himself. When Maia's around, the conflict is lessened, and the world floods with yellow. When Sam is walking through Here, among the souls who aren't directly a part of the gang conflict, the colour palette shifts towards white and Sam feels appropriately out of place.

The mystery of Beryl's disappearance and the slow uncovering of Sam's history and the realities of Here have me itching for the next issue, though I hope we see the dogma of Here expanded a bit. Despite a few confusing compositions, the art complements and supports the script beautifully. I think Dead Letters will be on my pull list for several months to come.

Bottom Line: The mythology of the world of Dead Letters is a little thin now, but there's lots of room for growth. The mystery has enough little reveals and new hooks to keep you turning pages, and it nails the noir feel perfectly.

Recommendation: Pick it up, and read it slowly, like sipping whiskey on the rocks.