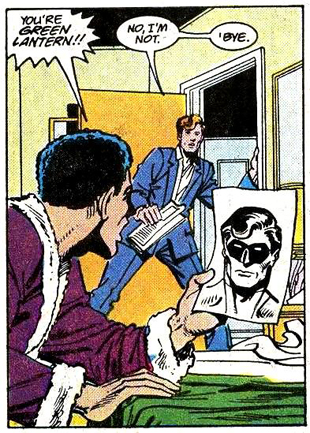 Heroes still tried to justify secret identities, but the arguments were flimsy and created narrative problems. The most common explanation was that secret identities protected a hero's loved ones from dangerous villains, but usually these loved ones were as much in the dark as archenemies. In fact, most supporting casts were unwittingly familiar with both identities, putting them at risk no matter what happened. Lois Lane and Jimmy Olsen were frequently targeted by supervillains for their connection to Superman; knowing that he's also Clark Kent really wasn't going to change much by that point. Far worse are the ridiculous lengths heroes went to while preserving their secrets; Superman used Clark Kent body doubles and robots to appear in two places at once, and even resorted to mind-erasing drugs when his friends got suspicious. Not only did this raise concerns about Superman's moral leanings, it weakened characters like Lois Lane, supposedly an award-winning journalist who somehow wasn't able to piece together the truth in front of her.

The problem isn't that secret identities themselves are bad - it's just that without the legal repercussions faced by true vigilantes, they lack justifiable context. This explains why, in the 70s and 80s, comic deconstructionists like Alan Moore and Frank Miller shifted the focus back to morally grey vigilantism. More recently, Marvel's Civil War event forced heroes to sacrifice their privacy as registered superheroes, widening the gap between masked vigilantes and public defenders. But in most cases, these changes either took place in an alternate universe or were eventually restored to a Silver Age status quo.

The Future of Secret Identities

It's clear that fans love the idea of someone having a powerful, secret second life, and the concept's venerability has made it an essential part of basic superhero mythology. So it is that for every character like Iron Man who finally sheds their secret identity, you have someone like One More Day's Spider-Man who is forced back into the shadows. Secret identities are, it would seem, here to stay.

The good news is that we're slowly starting to figure out where secret identities work, and where they don't.

The best heroes who can logically maintain dual identities across franchises are those who have an antagonistic relationship with authority. Batman and Spider-Man are perfect examples; Batman became more believable to the public when played against a corrupt Gotham police force, while Spider-Man is under constant scrutiny from J. Jonah Jameson and the press. But why does Iron Man, a publicly-adored CEO representing the military-industry complex, need a secret identity? It's overly complicated, and a two-hour film doesn't need that kind of disbelief.

If secret identities won't disappear, then at least comics could follow the example of film by ensuring it's not the default option. After all, the problem with secret identities isn't that they exist, it's that creators overused them until they had no meaning. The only question is what kind of superhero might replace the masked vigilante after almost a century... something we'll be exploring further in a future article.

To best be in a position to use his amazing powers for truth and justice, Marshall Lemon has assumed the disguise of a mild-mannered freelance writer for a great metropolitan pop culture website. Follow him on Twitter.