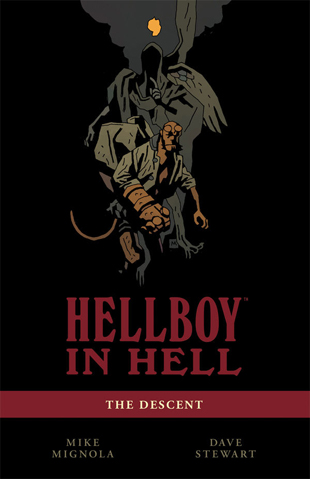 Beautifully drawn, bleak, and action packed, it might not be the best entry point for new readers, but it's a great, unfolding story.

If you're only familiar with Hellboy from the movies, you might think Hellboy In Hell sounds like his biggest action-packed extravaganza yet. After all, Mike Mignola's landmark character was heavily inspired by pulp stories with giant robots, supernatural monsters, and Nazi super-experiments. With this title, it's only natural to imagine Hellboy facing demon legions with a red right hand, his pistol, and good old-fashioned grit. But those reading Hellboy's actual books, or the spin-off B.P.R.D. series, will know differently.

The pulp spirit of the original volumes has dimmed as Mignola's world moves in a Lovecraftian direction, where humanity struggles in vain against an apocalypse that has already consumed entire countries. Hellboy In Hell brings these themes to their next logical step; with our hero is dead, drained, and at the mercy of inhuman creatures that reside in the afterlife.

To be clear, this is not saying the book is bad; far from it. Hellboy In Hell is just as good as the previous collected editions that made Mignola a comics icon. It's just that Hellboy the character is a shell of the wise-cracking force of nature he used to be, and that's kind of the point. Where previous stories treated Hellboy embracing his humanity as a victory, Hellboy In Hell shows that he did so at great cost. By rejecting his destiny, Mignola's hero resides in a hell of his own making, and there are still hints that the worst is yet to come.

Hellboy In Hell is set immediately after The Storm and the Fury, where Hellboy sacrificed his life (not to mention England) stopping a dragon that would have razed the entire world. With his battle seemingly concluded, Hellboy's soul goes directly to Hell, but not the version readers might have expected. It turns out that Hell's generals, upon learning that Hellboy was entering their lands, fled the capital city with their armies in tow, leaving various stragglers and massive eldritch creatures behind. But even in this bleak landscape there are enemies seeking the power of his Red Right Hand, not to mention familiar faces from previous books and a new ally from one Hellboy universe spin-off books.

After the apocalyptic finale of The Storm and the Fury, Hellboy In Hell certainly has a slower pace than what's come before. Most of the first volume is a Dante's Inferno-inspired journey, where Hellboy explores his new surroundings with commentary from spiritual guides. Sure, there are still monster fights (this is Hellboy, after all) but that's not the main focus here. Hellboy In Hell puts a stronger emphasis on world-building than advancing the plot through fists, adding details to established events and laying the groundwork for events to come.