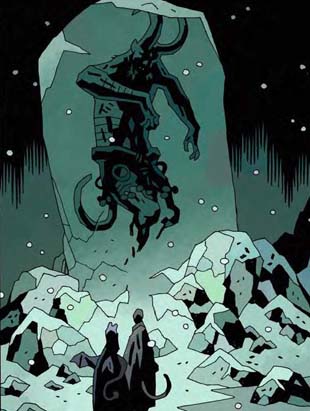 Hellboy In Hell also happens to be the most somber Hellboy book to date. Mignola's version of the pit isn't made up of fire and brimstone (well, not exclusively anyway) but of darkness, uncertainty, and regret. The few sentient creatures Hellboy encounters are all clearly damaged in some fashion, whether by fellow demons, the unfairness of the universe, or even Hellboy himself. There's a strong sense that everyone in Hell, including the demons, are victims of forces beyond their control, and I found myself feeling sorry for just about everyone.

Mignola's version of Hell itself is an interesting beast, combining various elements of religious mythology in a way that is consistent with Hellboy's lore and themes. Satan himself finally makes his Hellboy debut, but in a way that is tragic, surprising, and dramatically satisfying. Keeping with the Dante's Inferno theme, there's also an exploration of the common damned that evokes equal parts sympathy and regret. My personal favorite addition are the angels, who only appear for a single panel, but immediately make one question everything the series has suggested about heavenly powers.

Of course, since this is Hellboy's first time in Hell since being summoned to Earth as a child, it's a great opportunity to explore his demonic history. Not that this hasn't already been done at length; sometimes it seems like each Hellboy collection adds another convoluted layer to a perfectly adequate backstory. (Hellboy is everything from the Antichrist to the rightful King of England by this point.) Thankfully, what seems like yet another Hellboy origin story has a few twists to keep things fresh, including a reunion with his demon family. Readers will finally learn more of Hellboy's father, his siblings, and the effect of his human-demon heritage on Hell's population. Most importantly, Hellboy In Hell finally closes the Hellboy-will-spark-Armageddon plot thread, a premise that was already a dead horse several books ago.

There's still another five issues of Hellboy In Hell to come, so it's possible the slow-paced dynamic will soon be turned on its head. This volume in particular teases three major events Hellboy is destined to face (despite, you know, being dead) and implies that Mignola has plans for his hero well beyond this series. Whether that will take the form of a resurrection or adventures in the spiritual realm remains to be seen; it's even possible Mignola will go the full Dante with storylines in Purgatory and Heaven.

Regardless, I'm very pleased to see that Hellboy's journey isn't finished, and that Mignola is willing to take his characters in a brand-new direction.

Bottom Line: Hellboy In Hell Volume 1 is perhaps the bleakest Hellboy collection to date, but in no way does that mean it's boring. Readers will take an in-depth look at Mignola's version of the afterlife, see familiar faces from previous storylines, and glean hints of what the long-suffering character will face next.

Recommendation: If this is your first time reading Hellboy, you may want to catch up on other volumes to understand the series in context. But if you're already familiar with Hellboy lore, this collection won't disappoint.