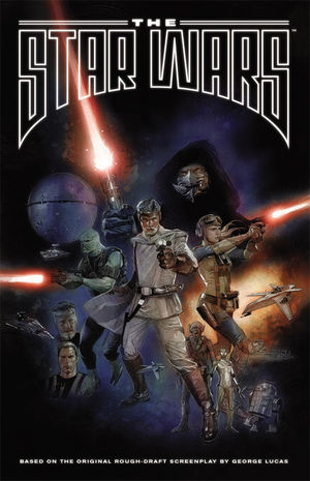 The Star Wars is a fascinating premise with unique historical value and gorgeous art, but at the end of the day, it's just another Phantom Menace.

If you've ever argued that the original Star Wars trilogy is superior to the Special Editions, you might be surprised to learn that George Lucas was changing things long before it stopped being clear whether or not Han shot first.

It wasn't until the second draft that the film we know as Star Wars Episode IV: A New Hope took shape. Lucas' original 1974 draft, titled The Star Wars, was radically different from the film that ultimately changed the world, featuring characters and events that barely resembled their iconic counterparts. That first script was therefore buried in Lucasfilm's archives, abandoned to be occasionally discussed on internet forums, while certain elements from it eventually made their way into the prequel trilogy.

Dark Horse Comics' The Star Wars is Jonathan Rinzler and Mike Mayhew's adaptation of that original script, borrowing from unused concept designs so fans can see the tale that might have been. Starting out as an 8-issue mini series, the entire tale is being collected into a pretty trade paperback due in shops July 23. The final result is a mixed blessing. On the one hand, it's absolutely fascinating to see one of the biggest franchises in pop culture come to life as it was originally planned. But as you read through, the unmistakable conclusion is that there was a reason this version of the story was ultimately shelved: It's not really that good. In fact, for once you might actually find yourself thanking the Force that George Lucas changed something about Star Wars.

The Star Wars is set in a very different galaxy then the one we recognize from the films. The Jedi Knights were once loyal bodyguards for the Emperor but, following a coup, have been forced into hiding from deadly Sith assassins. On the distant world Aquilae, Jedi General Luke Skywalker is readying the first true defense against the new Empire's expansion when an old friend emerges from hiding. The fellow Jedi entrusts his eldest son, Annikin Starkiller, into Skywalker's care mere moments before the Empire unveils a massive moon-sized space station as part of its offensive. With Aquilae's defenses broken, Skywalker and Starkiller must flee with the planet's rightful heir, Princess Leia, as the Sith prince Valorum gives chase. 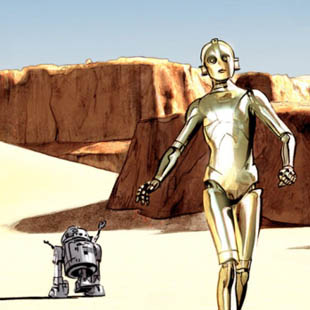 As the original trilogy is embedded in our cultural DNA, reading the book is a strange experience. Familiar names and locations now have entirely new contexts that clash with you expect from a Star Wars tale. The peaceful planet Alderaan is now the Imperial capital. Darth Vader is a military commander with facial scars and no connection to the Force. Han Solo is still a charming rogue, but looks like the Swamp Thing instead of Harrison Ford.

Oh, and R2-D2 can talk. Which is immensely unfortunate, because you'll wish someone would shut him up as soon as he starts. Not only does the charm of his character evaporate once you actually read his dialogue, you'll also discover he's as cowardly as Threepio and takes no initiative that a human hadn't programmed into him. Outside of his visual design there's little to distinguish him from his droid partner, since most of the time they're both bickering like an old married couple.

That being said... remember when Threepio gave R2 a small frustrated kick on Tatooine? Replace that with Threepio picking R2 up and literally hurling him across the sand. Sure, it's not exactly in character, but it's hard not to laugh at the ridiculous image.

Sadly, the rest of the plot really doesn't make up for these individual moments. Despite only being 180 pages, it feels far longer, and not in a deeply-immersed-edge-of-your-seat kind of way. The Star Wars packs in an entire trilogy's worth of locations between its covers, including a moon, a city world, deserts, jungles, and back again. The intention was clearly to portray a massive universe, but cramming everything into a single story means the reader has nothing to focus on. Episode IV absolutely benefitted from trimming its range down to a few remote worlds.