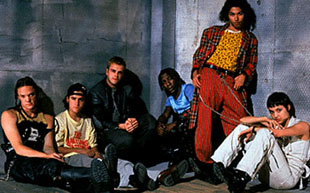 Hackers starred Johnny Lee Miller and Angelina Jolie as leet teenagers who discover that a corrupt security consultant who calls himself "The Plague" (played by Fisher Stevens) is ripping off his company via salami slicing. You really should watch this movie a million times, if only for how it butchers actual hacking and computer culture. (And how awesome it is. No, really.) But the first time you do, take special note of how everyone is dressed. The teenagers alternately wear skin tight fetish clothing, amazing leather jackets, weird Joker-meets-A Pimp suits, and for some reason, roller blades. And the Plague? He always wears a ridiculous trench coat, awful gaudy vests, and that beard. Oh that beard.

Of course, the Platonic ideal of this was The Matrix. Every single one of the heroes of that film are disaffected misfits with amazing computer skills. They also wear shiny black trench coats, leather pants, and so on. And god dammit, they did look extremely cool... in the movie that is. In real life, people tried to dress like them, but they just looked like they were required to stay 30 yards away from any school or playground at all times.

The truth is that hackers pretty much dressed then like now: comfortably. If you happened to visit DEF CON, the odds were that you'd see far more old t-shirts, hoodies, and khakis than $700 leather coats. Those are saved for the hackers' private yachts.

I'll be honest: I'd give anything to look awesome in black leather and combat boots. 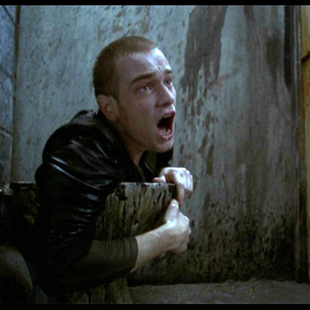 By the 90s, the old school way of depicting nerds was no longer in play. Nerds were becoming cool, so portraying them as Poindexters in high waisted pants and thick glasses no longer made any sense. But you still needed to get across that geeks are just different from normal people, only in a cool way. If you couldn't do it with clothes, then you did it with sounds, via their taste in music.

Part of this comes from the rise of music nerds as proto hipsters during the 90s. The Alternative music scene's popularity helped, since the whole point was that it was music for people who (supposedly) weren't "cool". Suddenly the guy you yelled gay slurs at had better taste than you did. Add to this the idea that geeks, by virtue of being curious, tend to actually have obscure knowledge about whatever it is they geek out about. Finally, throw in the fact that most people don't know dick about comics or computers, but they do know about music, and voila! Want to show someone is a for real geek? Give them obscure taste.

For computer hackers, this means something that sounds like a cross between Rage Against The Machine, A-Trak And Nine Inch Nails. That has a kind of logic to it of course. The Goth scene enjoyed shocking success in the 90s, with some real honest to god stars like Nine Inch Nails and Marilyn Manson were enormously successful. Hop Hop was also just becoming mainstream. Both examples were the source of constant moral panics. Just like this new "Internet" thing everyone was reading about in Time Magazine. Just like video games which, so we've been told since DOOM, causes kids to become violent sociopaths. Why not combine them into a 'scary', 'edgy' whole? 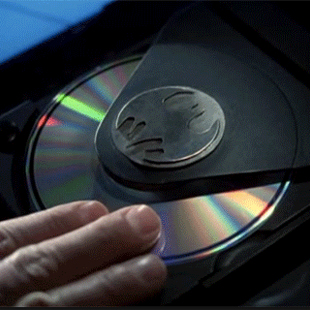 For non-technical geeks and outcasts, this meant obscure modern music, or long-since-forgotten stuff from decades past. And that makes sense too: especially when you're young, what you listen to is a signifier of your identity. Plus, a lot of writers and directors are big music nerds and want to write that into their work. Hence the use of obscure musical taste to make it clear that the kids of Empire Records, the junkies of Trainspotting, the total assholes of High Fidelity were outcasts. Hell, even Batman - BATMAN! - showed off some turntablism skills in Batman Returns. Though in fairness, nothing says street toughness like knowing one of the four pillars of hip hop. Still, does every nerdy person know everything there is to know about Arthur Lee or Scott Walker, or happen to be the only one at their school who knew who Eric B. and Rakim was? Probably not.

In real life, geeks listen to pretty much the same things everyone else listens to. Some do indeed have obscure taste. A great many more like regular old pop music, or maybe don't even care that much. Sure, there's probably a higher percentage of us who grew up thinking of 'Weird' Al Yankovic as a secular saint, but he just had a number one album so I suspect even that isn't unique. As far as pop culture is concerned however, true geeks exclusively listen to something you've never heard of.

To be honest, as an insufferable music snob, I'm OK with that.

It's tempting to laugh. It's even more tempting to say it's great that we've moved past the hilariousness of bondage and obscurity as shorthand for outcast. But we live in a world in which most popular sitcom in America is Big Bang Theory. No offense to anyone who enjoys it, but if I had to choose between fetish gear as a requirement for computer skills, or depictions of geekness so hackneyed even Revenge of the Nerds feels restrained, I'll take the sex club gear.

However, I'll be happy if I never listen to another song that sounds like Rage Against The Machine meets Nine Inch Nails.

Looking for more to read? Check out our complete Throwback-Thursday series here. Meanwhile, why not check out our sister site Break.com's SDCC coverage too?"