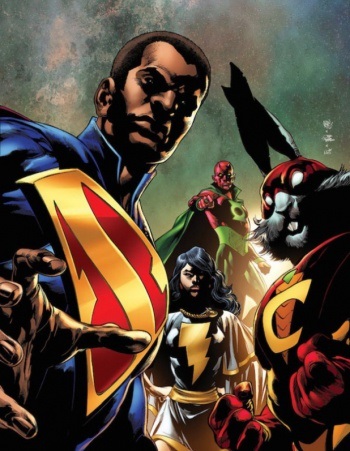 President Superman and Captain Carrot fighting "Doctor Doom" and pan-dimensional monsters would be amazing. Too bad that didn't happen in The Multiversity #1.

If the folks at DC Comics are good at nothing else, it's whipping together an impressive dimension-breaking crisis. But doesn't it seem a little strange that the same planet Earth is always in the middle of them? If the DCU really is having cosmic events every year, wouldn't it stand to reason that massive conflicts are also being thwarted somewhere that Superman, Batman, Wonder Woman, and the Justice League will never find out about?

That's the basic the gist of The Multiversity. Instead of pitting the New 52 Justice League against yet another universe-shaking disaster (they've got their own problems right now, thank you very much), Multiversity centers on a motley crew of heroes from parallel Earths facing something Earth One's heroes have no clue about. It's a great opportunity to properly map out the rarely explored 52 universes, meet characters buried in DC lore, and even give a few tongue-in-cheek acknowledgements to the competition at Marvel and Image.

The downside to that is that the concept is so huge that Multiversity #1 can't offer much of a story. Instead, it's dedicated to setting up the big picture ideas that will pay off in later books, while throwing a multiverse of characters and concepts at readers without giving space for things to sink in.

Multiversity is the latest mega-crisis project to come from DC scribe Grant Morrison, and bears some similarity to his Seven Soldiers of Victory books. Each Multiversity chapter will tell a standalone story in a parallel universe, building up interconnected scenes that describe a grander threat. Unlike Seven Soldiers, each book will be set in a different parallel dimension, focusing on different aspects and genres of DC history through the lens of rotating artists. It's a great way to draw in readers who might pick up the series partway through while still rewarding those who follow Multiversity from the first issue. 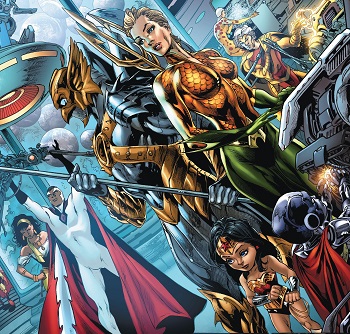 With that in mind, what exactly happens in Multiversity #1? Nix Uotan, the last of the Monitors, travels to Earth 7 only to discover that it's suffered an apocalyptic event. Dark beings capable of travelling between dimensions and breaking the souls of superheroes have ravaged the planet, forcing Uotan to trade places with Thunderer, Earth 7's final champion, to save his life. In response, Thunderer activates a machine that summons superheroes from across the 52 universes, forming an interdimensional league that can hopefully save the day.

And who exactly makes up these heroes from 52 worlds? First and foremost is President Superman, the black world leader and supehero of Earth 23. Next up is Captain Carrot, the anthropomorphic rabbit superhero of a cartoon physics world. Aquawoman is Earth 11's Queen of Atlantis. Red Racer is the Flash of Earth 36, and a full-fledged geek to boot. There's even alternate versions of non DC characters; Dino-Cop in particular is clearly supposed to be Image's Savage Dragon.