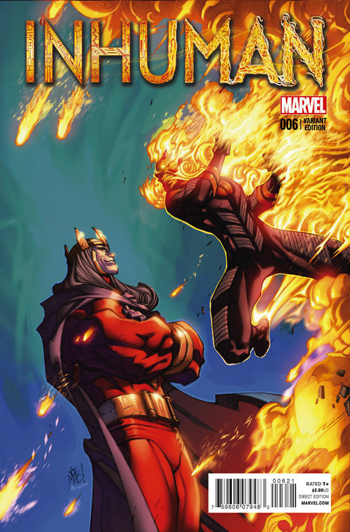 Writer Charles Soule and artist Ryan Stegman's Inhuman series follows the newly revealed city of Attalin, kingdom of the genetically modified race of the Inhumans, and the sudden influx of new Inhumans, called NuHumans, created when a cloud of Terrigen Mist was released into the world. The series continues to struggle to balance the shaky power levels and expanding backstories of the NuHumans with the powerful court of Queen Medusa, but in the sixth issue things are starting to get a lot more cohesive. The Unspoken, the dangerous and cruel former king of the Inhumans, has returned to Attilan, and his successful coup (in issue #5) has Medusa in chains. The NuHumans band together to fight back against The Unspoken, and push their new powers to the limit. Stegman delivers some satisfying action, and some dark, mood-setting shots that help balance out the exposition explaining why The Unspoken is a threat. Also helping this issue is the fact that it manages to avoid introducing any new NuHumans, and some of the Inhumans are off on side missions. Soule is managing an intimidatingly large cast well, and the further this series gets from introductions, the better it gets at telling good stories.

Favorite Moment: "Maybe try The Avengers - This seems like their sort of thing."