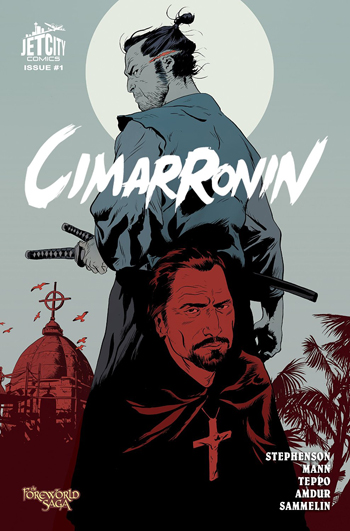 Cimarronin: A Samurai in New Spain #1 of 3

A rapier-wielding Jesuit priest and a disgraced samurai walk into a conspiracy in 1632 Spain. Seriously.

Cimarronin, from Amazon's Jet City Comics imprint, is a collaboratively written, standalone three issue series set in the alternate history universe of The Foreworld Saga, where the martial arts traditions of Europe and Asia collide. Illustrated by Robert Sammelin and written by Neal Stephenson, Mark Teppo, Charles C. Mann and Ellis Amdur, Cimarronin opens like a great kung fu flick, with non-stop blood, swords, and combat. Amid it all, the ronin Kitazume Gonpachiro, and his friend, the Jesuit priest Luis Manuel Pérez de Guzmàn, end up aboard a ship to Acapulco protecting a Manchu princess who has already left a swath of bodies in her wake. Cimarronin gets right to the action, and Sammelin's illustrations capture the frenetic power of swordfighting. All this book needs is a good soundtrack. It's not the most outstanding debut issue (a little more background would go a long way), nor it the most deep story, but it is solid fun.

Favorite Moment: "Go ahead, stab me with your Spanish knitting needles..."