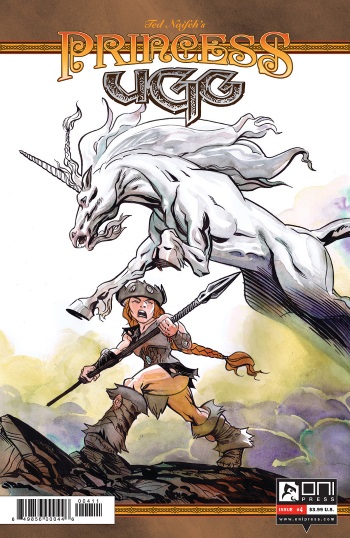 Pricess Ugg from Oni Press follows Princess Ülga, berserker warrior of the northern tribes, on her quest to find better way to end her people's ceaseless war with the frost giants. After learning that the five lowland kingdoms have a place where princesses go to learn, Ülga set out to join the school, and quickly discovers that her fighting and survival skills don't help much when it comes to weaving, royal etiquette, and the verbal sparring matches of the other princesses. Determined to learn diplomacy, Ülga 's first assignment is to become friend with her standoffish, prissy roommate.
Written and illustrated by Ted Naifeh, with colors by Warren Wucinich, Princess Ugg is fantastic blend of Conan the Barbarian and Disney-style princesses. Short sequences in each issues are done in watercolor by Naifeh, and the effect is stunning. Ülga 's accent can be a little jarring at times, but Naifeh's writing deftly avoids the tropes that could plunge a series like this into boring territory. Ülga 's motivations are far from cliché, the princesses from the lowlands have different cultures and personalities, and the world hints deftly at wider magical concerns. Princess Ugg has been such a satisfying read that I'm hesitant to talk much about its plot and character development out of fear of spoiling it. If you've ever felt out of place, or misunderstood, or like chasing a unicorn with a battle-axe, you'll find something to love in Princess Ugg.

Favorite Moment: "What do yeh take me for, a barbarian?"