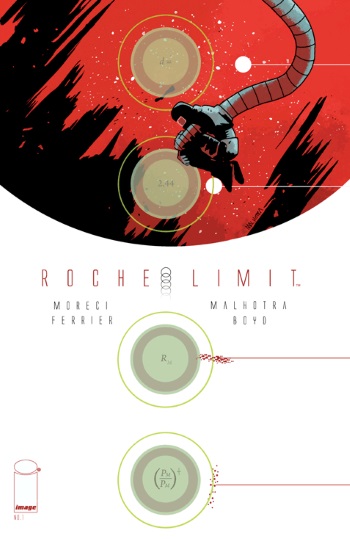 Written by Michael Moreci with art by Vic Malhotra, Roche Limit is the first of a three part science fiction noir from Image Comics. In astronomy, the Roche limit describes the distances where a satellite will disintegrate and become a ring. Saturn's rings do not become moons because, within Saturn's Roche limit, the dust, rocks, and ice cannot hold themselves together against the pull of Saturn's gravity. The Roche Limit colony is a small outpost in the Andromeda galaxy, home to over 10,000 people. The colony, built on the dwarf planet Dispater, orbits a spatial anomaly with properties that make it similar to and very different from a black hole. The colony has become a lawless place, with a broad class divide and a drug problem. When Bekkah Hudson goes missing, her sister starts a search through the colony's grimy underground.

Malhotra manages to capture the grungy sci-fi feel of the colony while keeping up the classic beats and look of a noir drama. The mystery of the anomaly, and the recent rash of disappearances is carefully built up. The stunning, full page views of space and precise scientific drawings promise a deeply researched, scientifically grounded story, thought the anomaly itself is like nothing we've ever discovered. It reminds me in many ways of Blade Runner and The Outer Limits. The Roche Limit is the second science fiction comic (after Lazarus) to make it to my regular reading list.

Favorite Moment: "Our only fate is to lie in the beds that we make."