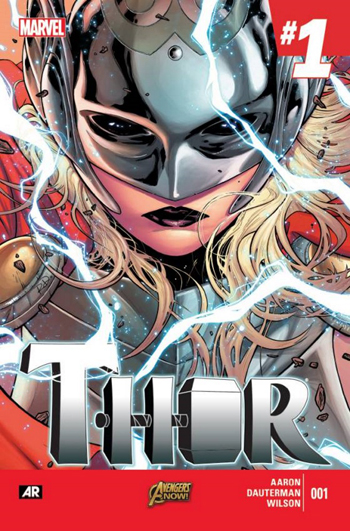 One of Marvel's biggest recent announcements was that Thor, the God of Thunder himself, would soon see his mantle (and hammer) claimed by a new female Asgardian who would, in turn, receive her own ongoing series and be the Marvel Universe's primary source of mythological ass kicking for the foreseeable future. It opens with the Odinson mysteriously unworthy of his magical hammer Mjolnir. Understandably devastated by his sudden tumble down the totem pole, he heads off to fight the dark elf Maleketh in a disastrous battle on Earth. While this happening the new lady Thor (identity still freaking unknown) emerges and claims the hammer for herself. I will say I was disappointed by how little actually happens in this book, but I can't complain too much. Jason Aaron's writing continues to be incredibly solid and the final pages left me pumped to find out what happens next.

Favorite Moment: "Worthiness should not be defined by the whims of magic weapons. Rise my son, and let the hammer be damned. Rise and remember the hero that you are."