Brian Michael Bendis says Powers is "a real show with a big cast and big budget" that he's approaching like a ten-chapter crime novel.

Yesterday at the New York Comic-Con panel for Brian Michael Bendis and Michael Avon Oeming's Powers, a packed theater full of fans got their first look at how the upcoming Playstation television series will both remain faithful to, and diverge sharply from, the long-running comic. In addition, the show's inaugural trailer was debuted, along with a brief clip from the show itself.

"This has been fourteen years coming," Bendis said as he introduced the trailer.

Moderated by Geoff Keighley, the panel was also attended by five other cast members: Logan Browning (Zora), Olesya Rulin (Calista), Susan Heyward (Deena Pilgrim), Noah Taylor (superpowered gangster Johnny Royalle), and finally Eddie Izzard (Wolfe), whose appearance was met with thunderous applause. Sharito Copley, who stars as ex-superhero Christian Walker, couldn't be at the panel; instead, he recorded a brief video message for the audience. "Hope you guys enjoy what you saw of Powers," Copley said in part.

Bendis explained the concept for those who haven't kept up with the comic. "Powers is about homicide detectives... who work cases specific to the world of powers," he said. Dead superheroes and supervillains--these cases all fall to the Powers department. The comic, and now the show, mix the genres of superheroes and crime fiction, with each case presented "from the dead body on up. "It's rated R, sometimes a hard R," he later said when Keighley pointed out the trailer's edginess. Presumably, being on PlayStation instead of network TV has allowed Bendis to keep that edge present, F-bombs, blow job jokes, and all. 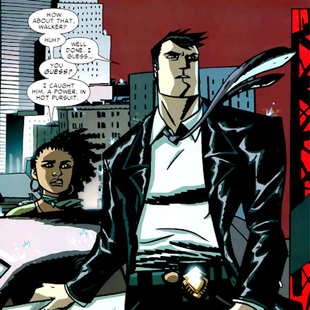 According to Bendis, Sony approached him with the idea of adapting the superhero crime comic as the first-ever Playstation television series. Addressing the untested format and, perhaps, obliquely nodding to the fact that the series was originally supposed to be a FX production starring Jason Patrick, Bendis was adamant that this series is as legitimate as it gets. "Some people don't understand, because it's a new thing, that this is a real show with a big cast and big budget," he said. He added that showrunner Charlie Huston, whom Bendis calls an "amazing novelist," is coming at Powers like a ten-chapter crime novel.

Bendis made it clear that the PlayStation show wouldn't be a "word-for-word" adaptation of the comic. "They're two mediums," he said. "That never works." The show is its own entity, though it will liberally use elements from the comic that the production team believes will make great television.

It was revealed during the panel that the last two episodes of Powers' ten-episode initial run are about to be written, and a very short teaser (which won't be made available online) was shown to give "a little taste of what to expect." In the brief clip, Walker jokes about how the exchange of fluids back when he was a Power could sometimes unexpectedly give his partners super powers, which is met with a deadpan response from Deena. Bendis explained later that for Walker, being a police officer is a more heroic gesture than he made as a Power, but that doesn't mean he's a great cop; he just knows a lot about the superhero world.