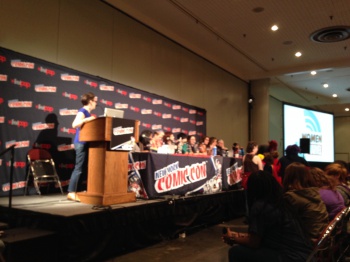 From tales of dealing with sexism to advice for aspiring writers, the Women of Marvel panel was a highlight of New York Comic Con 2014.

That's how Kelly Sue DeConnick, current writer of Captain Marvel, started the Women of Marvel panel on the last day of New York Comic Con. The obviously sarcastic statement was met with laughter and applause, followed by DeConnick giving out prizes to the numerous Captain Marvel cosplayers in the audience as the more than a dozen other women onstage got ready. "It's taking too long to set up because there's too many women on stage!" one joked. With a total of 15 women, among them editors, writers, artists, and a social media manager, it was definitely the most woman-centric panel I've ever seen.

Before introductions were made, DeConnick spoke up again, asking the women in the audience who read comics to raise their hands. Almost every female audience member's hand shot up, prompting DeConnick to reply, "Okay, so we can do away with 'How do we get women to read comics?' Women have always read comics."

She then asked those aspiring to work in the comics industry to stand up; there were far less audience participants, but still a pretty solid percentage of women on their feet, who were met with massive applause. "Take a minute to look around at one another," DeConnick said. "You need community to do this. You need support to do this." The panelists advised that working in comics, like making a living in any creative field, would be difficult, but "you need to start. You need to start now... Ideas are cheap. Showing up and doing the work, that's the hard part." 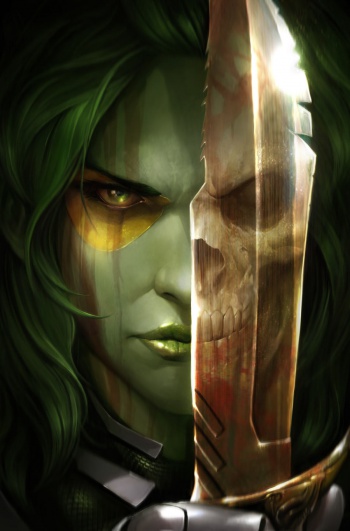 That's a huge presence not just for a panel of women, but any convention panel, which generally top out at a handful of panelists. There were so many women onstage that they couldn't all fit; many squeezed in and shared microphones, and DeConnick spent part of the panel standing on the floor in front of the stage.

After the lengthy introductions, Schaefer moved on to discussing the panel's upcoming projects, starting with The Burning World, Part 1, which begins with X-Men #23. Written by G. Willow Wilson, the story sends the all-female X-Men team into "the bowels of the Earth." Also early next year, Marvel will commemorate National Women's History Month with 22 to 25 Women of Marvel variant covers in March. Variants for Uncanny X-Men and Thor were shown, and Schaefer promised that more announcements would be coming.

The first of two big announcements was Margaret Stohl's Black Widow young adult novel, due out in 2015 (the slideshow had "Spring 2015" listed as the release window, Stohl said "fall"). Stohl called it "the bad-assiest thing I've ever been asked to work on in my life," noting that Black Widow is "more of a Wolverine than a Captain America."