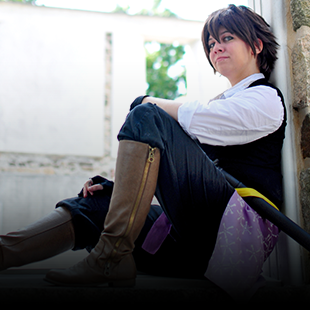 Making costumes in time for a Halloween party doesn't have to be expensive.

I know a thing or two about costumes. I began cosplaying in 2008, and by 2010 I was making costumes on my own. And like many cosplayers, I got a taste for dressing up as my favorite fictional characters as a kid on Halloween.

But let's get real: mass-produced Halloween costumes aren't necessarily good. Women's sections of Halloween stores present "sexy" as the only option, manufacturers market cultures as costumes, the variety of costumes is poor, and some costumes are laughably inaccurate. In other words, there are many good reasons you might head into the costume store and find yourself still wanting.

On the other hand, you could consider making a Halloween costume on your own.

Of course, for a lot of people the hurdle of learning to make your own costumes seems too large to jump. And it's true that along with the cost of buying fabric and the time spent to put it together, handmade costumes are a challenge. But it's easier than you think for a beginner to jump in, and you don't have to break the bank doing it. I've done both inexpensive costumes that cost me under $50, and I've done costumes that were closer to $300.

It's Halloween, and I'm betting you don't feel like dropping $300, however. So read on for some easy tips on making your own costume and doing it on a budget.

1) Start early or scale back.

If you're only just starting your Halloween costume now, you shouldn't expect to do a costume that requires a lot of time and materials. However long you think you'll need to make your costume, triple that estimate. You will make mistakes and need time to fix them.

My last Halloween costume was a group of Powerpuff Girls. We started planning in early September, taking a trip to the store to figure out what fabric to use. Because we planned on making all three out of the same material for cohesion, picking a fabric that came in the right pink, blue, and green was difficult, and we ended up spending the extra time dyeing the fabric. Between making the three costumes and having responsibilities like college, we were able to finish about a week before Halloween. Even then, the costumes were quite the rush job, and my own suffered as a result. Had I started sewing earlier, I would have felt less pressure to cut corners when I ran into sizing errors. Learn from the mistake I continually make: things will usually take you three times longer to complete than you expect.

Be realistic about the skills you have and the time you have available at your disposal. If this is going to be your very first costume and it's mid-October, plan to do a costume that has no complicated parts and no props that are necessary to the costume. If you are buying a part of the costume that will need to ship to you, when will it arrive? Buying wigs or pieces of a costume should be done well in advance, especially if you're buying products sold outside of your country.

If all goes well and you receive your products early, that's great! Except the wig you bought or the piece of clothing you bought doesn't exactly match the picture of what you bought online. This happens. Unfortunately, it takes time to communicate with the company and exchange the item. If you're short on time and you can make it work, don't fret. Several times when I have taken the cheap route of buying wigs on eBay, I've received items that weren't precisely what I ordered. On three occasions, I've received wigs in the right color but a longer length. I ended up keeping them and cutting them shorter. Don't assume whatever you receive will be perfect.

Starting early will also allow you to take advantage of sales and coupons at fabric and craft stores. For example, JoAnn will regularly mark certain types of fabric on sale often at 30% or 40%. Coupons arrive in the mail, in newspapers, through the company's app, through email, and online. New ones appear each week. Never go shopping without coupons on hand. During my last shopping trip, I saved myself $30 thanks to sales and coupons.