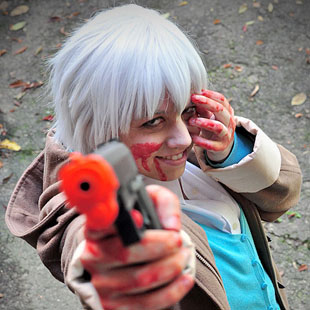 3) Thrift stores are your friends, but they're also hit or miss.

Don't be intimidated by all of the sewing; you don't always need to sew for a costume. Some costumes you can make out of things found in your closet and thrift stores.

Thrifting allows you to find clothes for a cheap price. In some cases, people will even go thrifting for a garment made out of more expensive fabric to buy that fabric inexpensively. Thrifting works especially well when a costume is made up of everyday pieces of clothing, such as dressing up as characters from Supernatural, Doctor Who, Bob's Burgers or other shows set in modern day. This also works for "casual cosplays," costumes that people will assemble using common clothes to represent a character. Considering most clothes at thrift stores are less than $10, someone could easily make a Rose Tyler costume from modified secondhand clothes.

For example, the cheapest costume I have ever put together cost me $50 total, but most of it was things I had bought years ago and put into a closet. One evening I cosplayed as Rico from the manga and anime Gunslinger Girl because I was looking for a comfortable, easy costume to wear for one night in the cold. The costume comprised a black turtleneck shirt, khaki pants, a belt, and a short blonde wig. I already owned the pants and the wig (which had already been used for three different costumes!), and I was able to find the rest, plus a cheap prop gun, through thrift stores. That round of shopping cost $15. Another costume I did, Shion from the anime No.6, cost slightly more than that, but again I was able to find several pieces of clothing in thrift stores.

However, you can't go into a thrift store knowing you'll walk out with what you need. The clothes at thrift stores are replaced on a fairly regular basis, so once they're gone, they're gone. There are no mass mailings going out indicating what's available, so you can't go into a Goodwill being certain you'll find the perfect trenchcoat. However, some Goodwill locations sell things in online auctions, so you aren't confined to a local Goodwill location.