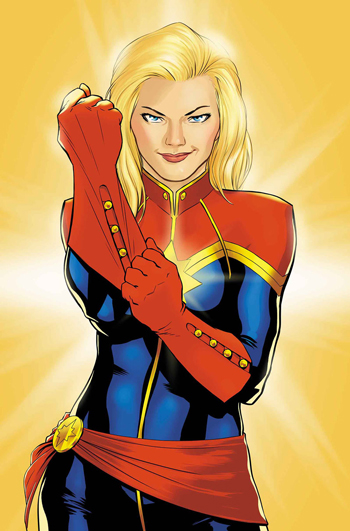 If you were wondering just who Marvel's first female film franchise lead is, wonder no more. Welcome to super school.

So. If you've even a passing interest in superheroes, sci-fi or blockbuster movies in general you probably saw that Marvel Studios has revealed its planned next four years of movies - collectively known as Phase 3. The roster included plenty of titles folks were expecting (Captain America: Civil War, Doctor Strange, Guardians of The Galaxy 2,) plus a few people had been seriously hoping for: Namely Black Panther and Captain Marvel.

Wait. Captain Who? Marvel seriously has a character who's the "Captain" of their brand-name? And, wait - she's a... she?

Alright. I also have a companion piece to this one up on The Escapist explaining The Inhumans which... is a little long, because Inhumans. This one, on the other hand? Some of this I can shortcut you on. Case in point: Yes, Marvel has (multiple) characters named "Captain Marvel," but none of them are the first person to call themselves "Captain Marvel." The original "Captain Marvel" is actually in books now published by DC but he's not allowed to use his name. Confused? I don't blame you - watch this video and it'll make more sense.

Back in the 60s, Marvel launched a new hero called Captain Marvel. He was an alien spy (for The Kree) named Mar-Vell who was taken for a superhero by humanity and opted to stick around and make it work. He died (of cancer, of all things) and a whole mess of other people have been Captain Marvel since then.

But while he was alive, Mar-Vell of Kree had a human love-interest in the Air Force pilot (and undercover CIA Agent) Carol Danvers. When female counterparts of male heroes came back into fashion in the 1970s, Marvel contrived a storyline whereby Carol's proximity to various Mar-Vell battles had caused her to absorb super-powers of her own. Imbued with super-strength, flight and the ability to hurl energy bursts from her hands, Carol starred in her own series as Ms. Marvel.

Ms. Marvel's comics are fondly remembered by 70s Marvel fans, but were only a modest success at the time. Like many "almost hit" heroes with devoted fan and creator followings, she lived on for a time as a member of The Avengers... until she was unceremoniously removed from the team during the book's 200th issue special by a "cosmic pregnancy" storyline regarded as one of the worst comic-book stories ever published. The details are convoluted, but you can get the Cliff's Notes version (in two-part video form!) HERE and then HERE.

Suffice to say, Danvers stopped being Ms. Marvel, then adopted several other names before slipping into the ether of comics obscurity. Events spinning out of the 2005 miniseries House of M brought her back into the forefront, at which point she became a fixture of post-Disassembled Avengers teams. Most recently, she's been promoted officially to the role of Captain Marvel, and it's this incarnation of the character/franchise - Carol Danvers as The Captain - which Marvel has added to its 2018 release schedule.