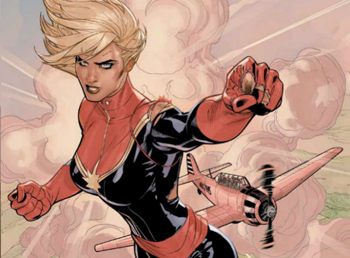 Well, in the immediate, this will be the first "solo" Marvel feature (though from the sounds of things having other characters hanging around more in each others' films seems to be Marvel's "thing" going forward) to feature a female lead - and yes, this is 2014 so that does, in fact, matter quite a lot. Marvel has famously had this one in the pipeline for years, but in waiting until after Warner Bros already announced their Wonder Woman movie, they lost the chance to call "firsties" on this particular milestone. Instead, look for them to highlight specifics, like the fact that Captain Marvel will be the "most powerful" person in their Cinematic Universe, or the subtle importance of her title ("Captain" instead of "Ms.") being a non-gendered moniker.

But apart from sociological concerns? Yeah, it's still a pretty big deal in terms of what new/different flavors it could bring the Marvel Universe. If the character's look resembles any of her comic-book costumes (I'm pulling for the classic 70s black "swimsuit" myself, but I image I won't get my wish) she'll be the most "classical-superhero" (read: a strong person in tights who flies) looking person in these films, and her alien/outer-space connections might provide us a clue for what this summer became the most pressing question of the entire Marvel Universe: What has to happen for the (suddenly mega-popular) Guardians of The Galaxy to meet up with The Avengers? 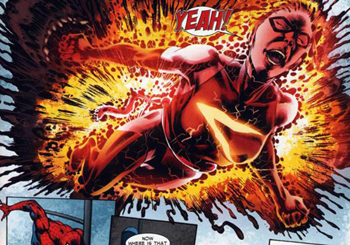 Well, from an adaptation standpoint it's going to be probably the most interesting Marvel project since Guardians. It's hard to imagine that Marvel will decide to go through the convoluted rigmarole of having Mar-Vell show up, establish himself and pass the mantle in the background of multiple other people's films, so one is probably safe in assuming that Carol will get a standalone origin for her film. It likely won't need to be that different (captured and experimented-on by The Kree? Chance encounter with an Infinity Stone gone wrong?) but it'll still be a more substantial ground-up rebuild than folks have come to associate with fan-appeal-first Marvel Studios.

There's also the matter of how (if at all?) she fits into the ongoing Marvel Studios megastory. The capper to the "Phase 3" reveals was that the third and fourth Avengers movies will encompass a two part story called The Infinity War, and that Part I will feature a new lineup for the team likely not including most (or any) of the original heroes - likely the result of discontent spinning-out of the ominously-titled Captain America 3: Civil War. It's not hard to imagine Captain Marvel stepping into a slot on that "new" team, especially since setting her up in one or more of the previous films as (at first) "Captain Carol Danvers" with powers/reasons to be revealed later (Marvel Studios has decided to move away from spending entire films on origin stories) wouldn't be difficult at all.

But the main point I keep coming back to is this: Yes, we needed more woman-led superhero movies, period. But Carol Danvers (by any name) is one of the more interesting characters Marvel could've gone with to diversify their Cinematic Universe. I'm beginning to agree with some voices in the film critic press that the nigh-orgasmic cheerleading for what is, at the end of the day, another corporate mega-franchise from film buffs of my generation is a bit worrying at times... but this (plus Black Panther) is a reminder of why we started in the first place.