Comics used to just be for the kids, but no longer. With more mature themes, better writing and illustrations, comics have become a geek paradise that even even moviemakers are latching on to. So what do you give the comic book fan on your gift list? Check out our suggestions.

And if it isn't comics books, what better than robots to build or Legos to assemble? We've got just about anything that might scratch that itch. 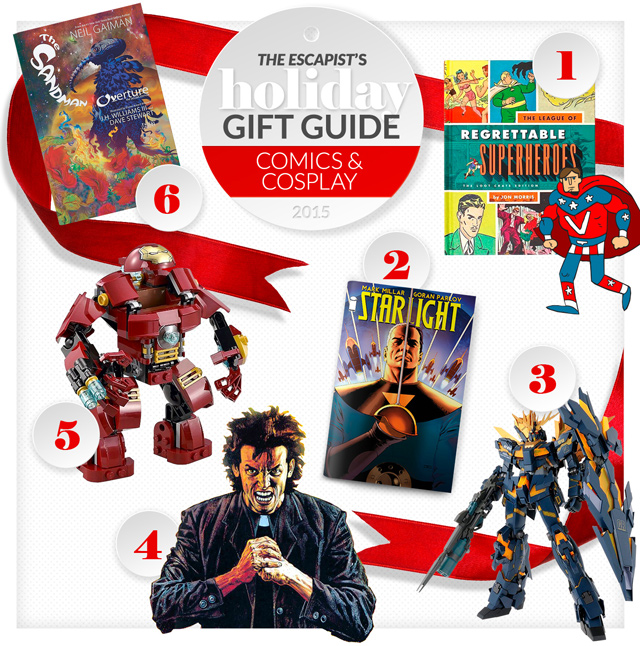 Liz says: Not every superhero can be Iron Man, Spiderman, or Batman. D-listers need love too, and with League of Regrettable Superheroes, you can catch up on the strange stories of the even stranger "heroes" in a single volume. From Doll Man to Doctor Hormone, Spider Queen to The Eye, League of Regrettable Superheroes is a compilation of disastrous misfires from comics past, perfect for both the second stringer or underdog cheerleader in your life. Creator Jon Morris plunged deep into the sea of oddities to bring us the greatest possible collection of unabashed "WTF" characters ever to grace the covers of their own fateful comics.

Stew says: Starlight is a series founded on the simple question of what happens after? When the space opera ends and the hero returns home, how does their life play out? In the case of Duke McQueen, not so well. A fighter pilot transported to the world of Tantalus, McQueen frees the alien world and then returns home to find that no one believes his story. Now an elderly widower ignored by sons that think he's a joke, he lives a sad existence where his only solace are memories of his wife and that world where he used to be a hero. Then a spaceship lands outside of his house piloted by a young boy who tells him that he's needed once again.

Written by Kick-Ass creator Mark Millar and illustrated by Gorlan Pavlov, Starlight is the perfect present for anyone who enjoys softer science fiction filled with rocket ships, sword fights and cheesy one-liners. Equal parts thrilling and bittersweet, this mini-series was easily one of the best comics out there during its run. Its only real flaw was that it ended far too soon. Six issues, wonderful as they were, were simply not enough time with this universe and the characters that inhabit it.

Hayden says: If you're a fan of Gundam, especially its series Mobile Suit Gundam Unicorn, then the Bandai Tamashii Nations PG 1/60 Unicorn Gundam 02 Banshee Norn is a dream. This kit is the largest and most detailed model grade consistently available from Bandai. At a 1/60 scale, this model comes in at a whopping 15 inches tall. It is also completely compatible with the LED set made available with the first Gundam Unicorn PG model. With 58 frames of parts, incredibly detailed stickers, and various options for weapons, this model will help you pass the hours stuck at home during the Winter holidays.

The model is fully transformable between its Unicorn mode and Destroy mode and does not suffer any loss in range of movement, meaning it can recreate any scene from the original anime. Thanks to the special stand, this model is perfect for displaying on your shelf or mantelpiece and even comes with standing and seated Riddhe Marcenas figurines to make the suit feel even more authentic. This model is not for the faint of heart, but if you're a fan of Mobile Suit Gundam Unicorn or an expert Gundam builder, this is the "Perfect" model for you.

Marshall says: Did you watch that trailer for AMC's Preacher, but couldn't figure out why the internet was making a big deal about it? Then perhaps it's time you read the most controversial book ever produced by Vertigo Comics. Created by Hellblazer's Garth Ennis and Steve Dillon, Preacher follows Jesse Custer, a small-town Texas minister whose soul is bound with Genesis, the offspring of an angel and demon. Partnering with his ex-girlfriend, now-hit-woman Tulip, and an Irish vampire named Cassidy, Jesse sets out across America to find out why God abandoned his creation.

Running for 66 issues and a handful of specials, Preacher was infamous for its violence, profanity, and irreverent depictions of religion and the supernatural. It was also directly inspired by Ennis' love of Western films, introducing John Wayne as Jesse's spiritual guide, and an Unforgiven-esque Clint Eastwood figure who is the patron saint of assassins and murderers. While Preacher feels less edgy in today's secular climate, it's still filled with wonderful characters and action sequences that are fondly remembered today - and leave you wondering how AMC will possibly adapt it to TV. We'll find out next year; but in the meantime Vertigo has re-released all 66 issues and specials in a series of hardcover volumes, making it easier than ever to catch up on the landmark series.

Stew says: Sometimes you want a gigantic LEGO set with thousands of pieces that takes days to build. Other times, you want sets like the Hulk Buster Smash. Costing 30 dollars and clocking in at a modest 248 pieces, it's a small set that accomplishes big things. Containing four mini-figures (including an adorable LEGO Hulk), the center-piece of the whole thing is, understandably, the Hulk Buster armor itself.

Using the bulk of the set's bricks, it manages to be compact while also being just detailed enough to look nice. It also has some playable functionality. This isn't a set designed to be a show-piece that you build, toss on a shelf and never touch again. It's decently durable, has moving fingers and there's even a working cockpit to pop the set's Iron Man mini-figure into.

Long story short, if you're looking for a superhero-themed LEGO product that's fairly impressive but won't break the bank, the Hulk Buster Smash set fits the bill pretty much perfectly.

Marshall says: It's no exaggeration to say that The Sandman is among the most significant and influential comics ever published. If Watchmen and The Dark Knight Returns helped us view comic books as literature, Neil Gaiman's story of the Dream King elevated them to modern art. But Gaiman still had one more story to tell in The Sandman: Overture, a prequel published twenty-five years after the original series launched. That story is finally collected in a gorgeous hardcover deluxe edition, a perfect gift for any long-time comic fan.

The Sandman: Overture takes readers back to 1915, when Dream was called away to the cosmic war which left him in a weakened state for his inaugural issue. Outside of finally exploring these events (and wonderfully so, I might add), Overture's deluxe edition includes a new introduction from Gaiman along with interviews and bonus material from Vertigo's special edition issues. Collected volumes were always the best way to read Sandman, and Overture is no exception. Being able to hold the finished book in your hands is - you'll forgive the phrasing - a dream, especially for such a worthy conclusion to Sandman's legacy. Get it today.

Related to:
the escapist staffchristmascomics and cosplayholiday gift guide 2015
0
Tweet