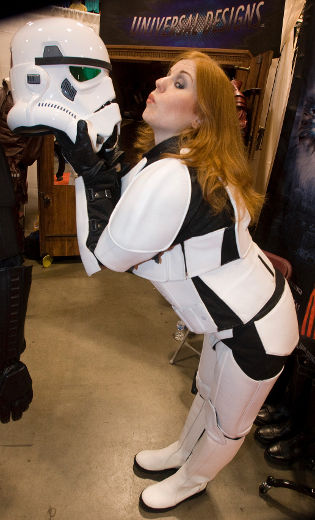 Before you start to think that cosplayers are all just parasites, however, there are things that cosplayers can do that official character employees can't, like visit children's hospitals, march in local parades, do face painting at summer fairs, and various other things that license holders don't or won't do. The "pro cosplayer" space isn't totally narcissistic.

Of course, the flip side of this is that there's a reason that not every really good cosplayer turns pro. You really do need skills beyond looking good in a costume to have anyone want to pay you money, because so many cosplayers these days look great. Social graces and being a quick learner were things I found were very useful to me in getting work: Companies could trust me to talk to booth visitors and the media, get attention, and not embarrass them. I even managed a pin up pose in a Stormtrooper outfit once that made it into a newspaper... complete with the name of the company I was promoting in the shot. Anyone who says that being a booth babe isn't a skill has never been a booth babe.

It is possible, however, to know too much about a character you're cosplaying for pay. When I was doing promo work as Quorra from Tron Legacy, Disney reps told me, very politely, to not use quite so many Tron references when talking to people. Apparently "end of line" and "I fight for the user" were such dated quotes that they were lost on the audience they were trying to attract for the new film. Whoops! The bright side is that I discovered that Disney people really are that nice.

You have to be that nice when interacting with kids. The Disney-adjacent Frost Sisters are another good example of this reality. What makes them an in-demand act is a combination of reliable work ethic, stage presence, and being very very patient with very very excited children. It's this last skill that probably serves them best. Many girls can learn the Frozen song and dance routines, but keeping a smile on your face when a hyperactive kid rams their head into your gut for the third time in ten minutes... that's a unique talent.

Clearly none of this sounds like the "professional cosplayer" model of sitting at a booth and selling pictures of yourself. That's because you don't make any money that way anymore. After printing charges and the cost of the costumes themselves, you rarely even make your costs back on signed photos these days.

Instead, cosplayers that make money are the ones that turn it into a true art. There has to be an iconic or transformative quality to your costumes that adds something to the legacy of the character as opposed to just replicating what others have done. That's not easy, but when you notice other cosplayers copying your designs or techniques you're on the right track. So don't get mad - get merchandised! Produce a book, make YouTube videos, or do panels or classes on how you do what you do. And use cosplay to attract fans to your original work, because cosplay is art, but a cosplayer's art doesn't have to be limited to cosplay.

So "professional cosplayer" are more accurately professional models, costume designers, entertainers, or prop makers. The cosplay element might be your inspiration, but it's not the thing that will get you paid.