While diversity is an important element of cosplay, I try to make a distinction between featuring diverse cosplayers and featuring cosplayers because they're diverse. When I meet someone like Abby Green, the cosplayer I featured this week on Agents of Cosplay, I did have some concerns that my motivations for her inclusion will be misconstrued. I didn't feature Abby because she's a little person in a wheelchair. I featured Abby because she's a dynamic, well-spoken individual with an obvious passion for cosplay. Is her unique perspective connected to her disability? Absolutely. If she was a dud on camera, though, that wouldn't have mattered. 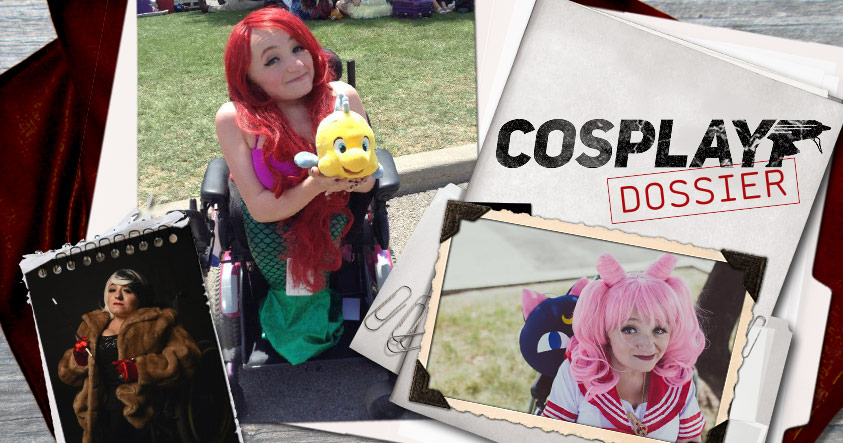 It annoys me that I even have to state this, but that's modern reality. Too many people make the assumption that disabled people are included in media because of their disability, not that their disability is only one part of their physical reality. The thing I love about cosplay is that the whole hobby is about overcoming physical challenges and self-defining beauty. We all have our unique challenges where cosplay is concerned. Many cosplayers secretly nurse ankle, back, knee and neck injuries, myself included. When you're an obsessive performer, pain is part of the territory. But these are hidden issues. Something like a wheelchair is noticeable. And because of this, people do some utterly bizarre things where people in wheelchairs are concerned.

Some people talk to disabled people like they're children, slow-witted, or deaf. You can imagine that this phenomenon can be exacerbated when costumes are involved. Other people stare and whisper, and I had no idea how unnerving that was until I dared to go to a restaurant with crutches. After that, I totally understand why my friends with disabilities say that they'd much rather people asked them questions than stared at them like lepers. The nice thing about cosplay is that all cosplayers get stared at to a degree, so at least that playing field gets levelled.

Of course, then there are the cruel comments. People online get stupid with everyone, and there are still people who think cosplay is dumb so it's okay to make fun of us. But resist the urge to jump in and play white knight before asking a cosplayer if they want this sort of assistance, because some of us would rather ignore the haters. Similarly, it's better to ask a person with a disability if there's anything they need, instead of assuming they need help. One person may be fiercely independent and want to do everything on their own. Another person will appreciate you helping them fix their costume, open a door, or help them into an elevator. The important thing is to let it be their choice.

A wheelchair is a mobility tool, not a cage. It helps people who need it get around, kind of like google maps. As I mentioned in the Agents of Cosplay video, it's important to avoid the "stunning and brave" fallacy when dealing with people with disabilities. Todd Vaarwerk, Director of Advocacy and Public Policy for Western New York Independent Living, explains: "Being both an advocate and a person with a disability, I've never had a reason to either consider myself, or seriously accept anyone calling me 'brave' for doing the same things we all do every day; work, eat, drive, and enjoy the pleasures of life. Feel free to acknowledge my drive, my commitment, my skill... even my luck... but calling me brave shows more of your fear about being able to adapt than it does about my accomplishment."

Sure, cosplayers in wheelchairs need a ramp to get into the building, and they might have some issues getting through some doors, but so do people in mascot suits. If a building is truly accessible, the experience for a cosplayer with disabilities should be no different than an able-bodied cosplayer. But many public spaces are still not truly accessible, and that's an ongoing frustration of mine.

Many city transit systems are accessible by the skin of their teeth. Lifts that require assistance to operate, door opener buttons placed in unreachable places, and movement pathways that are too narrow are among the first issues a cosplayer in a wheelchair will encounter while trying to get to a convention.

Convention shuttle services often aren't accessible either. This forces people with disabilities to incur extra costs to get between the convention hotel and the event, which enrages me. I'm looking at you, E3. Feel my cold stare and get transit for attendees in wheelchairs staying at convention hotels! We're not talking about small amounts of money. It can be as much as eighty dollars a day. Over the course of a three day convention, a person in a wheelchair might spend two hundred and forty dollars an able-bodied person doesn't have to shell out. That's... that's just bullshit!

While people in wheelchairs excel at working around these issues, they shouldn't have to. In properly accessible, educated environments, people in wheelchairs or with other disabilities don't have to be "brave". They just have to be people. Now cosplayers are certainly stunning, but that's regardless of their shape, size, color, or how able-bodied they are as long as they have confidence.

Cosplay is about temporarily trading boring old reality for a much more fun, freeing state of being, and a wheelchair shouldn't change that one bit. The current state of things means that a person with a disability does have to put up with more unpleasantness to attend conventions, so they do need more fortitude than the rest of us. But the fact that these things require people with disabilities to be tougher and more patient isn't a story of personal success. It's a story of society's failure to treat people with disabilities like people.

Let's do better. Because we're able. Let's be reminded by people like Abby Green that we all lose out on joy when we make things less fun for someone because they need an extra gadget to get around.