If you haven't seen it yet, watch the Ivy Doomkitty interview on this week's Agents of Cosplay as well as reading this column. It's possible she addresses the topic of how cosplay can help a person's self esteem in a way more people will understand. Her comments really resonated with me, because I've had similar experiences. So I want to tell my story too. 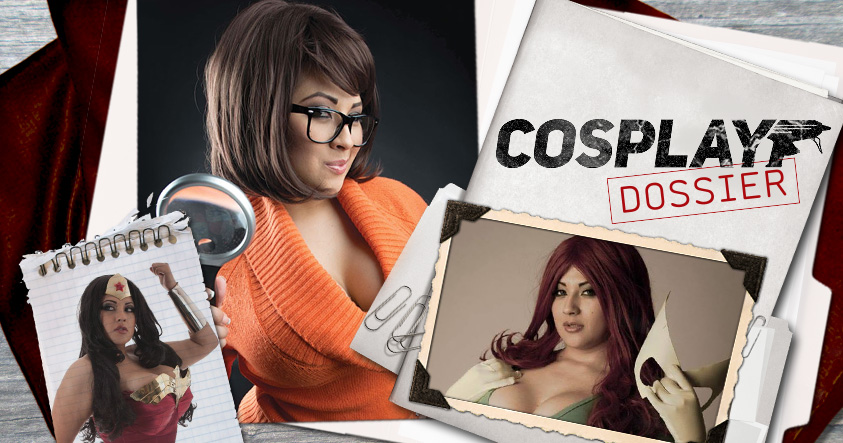 Growing up, I was the ugly, awkward, nerdy, overweight one in my family. My younger sister was the cute, popular one, and frequently the center of attention while I got the sense my parents were embarrassed of me. I got well into my teens feeling like my options were "be invisible", or "be rejected", even by my own family. I don't say this looking for pity, because this is the story of how I climbed out of that feeling.

I started making costumes well before high school, because it was a way of being judged as someone other than myself. My first costume was a skunk, because I thought black cats were played out at Halloween. Does that make me a furry?

It's a weird feeling, to believe that you can only be praised when you're pretending to be someone else, but that was my reality as a bookish nerd who liked Dungeons and Dragons and video games and wasn't terribly invested in fitting in. The low water mark was when a rather physically attractive high school classmate I was tutoring asked me what I would do in a situation "if I was a girl."

Okay, I said he was attractive. I didn't say he was terribly smart.

Things changed when I was sixteen years old and I made a Halloween costume of Catwoman from Batman Returns. Nowadays that would probably be considered inappropriate for someone of that age, but the 1990s were a different, less puritan time. I wasn't relating to Catwoman as a sex symbol. I was seeing her as a woman who didn't want to be a victim anymore. She went from a quiet, picked on girl, like me, to defining her own existence. That involved some sacrifices, but it just seemed so worth it.

Suddenly I was recognized as female, and I didn't know what to do with that sort of attention. It worked a little too well: one guy who took a liking to me was the crush of a friend of mine. Of course, I didn't know how deep that crush went, and she said it was okay... but that was how I learned that it is never "okay" to date the crush of a friend. It always ends badly. Always. And possibly produces a Taylor Swift song.

Perhaps that's why I chose Poison Ivy a few years later for my first actual cosplay. By the time I was a young adult, I despised unwritten gender rules. Cosplaying Poison Ivy gives me the opportunity to let that hate just burn like phosphorous for a few hours and have it be put to good use. The thing about cosplay is that it's not just about being pretty. Compliments about my cosplays include my ability to embody a character. There's a skill involved.

By the time I did the Poison Ivy cosplay, I'd been working in television for a while. It's no secret that the TV industry can make a person feel pretty worthless. It chewed me up pretty badly, and I didn't yet understand how to recognize an abusive workplace. My head got so messed up that I started blaming every rejection, every insult, and every time someone yelled at me on being too big - not just physically, but in terms of personality as well. I started to hate myself for not being able to shrink down, shut up, and just smile more.

Then I discovered Power Girl. 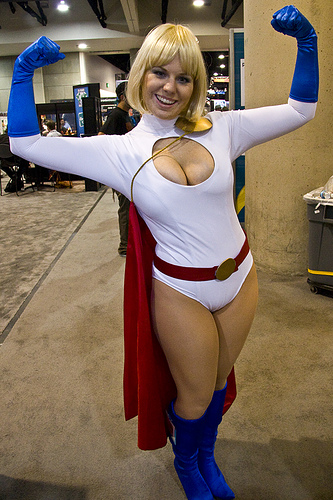 Power Girl's official weight at that time was one hundred and seventy pounds. She had breasts the size of a grown man's head. She punched stuff without a lot of provocation. And at that time in the Justice Society comics, her stories weren't structured around constant boob jokes. As dumb as the boob window on her costume is, and as tricky as it is to stop the cape from sliding around, cosplaying Power Girl around conventions made me realize that super skinny nice girls aren't the only women people find attractive. Some people actually like women who punch stuff! I added a Ms Marvel cosplay too, because Frank Cho's female characters take up physical space, they're quirky, and they punch dudes when they act like pigs. (Apologies to Dean from Liberty Meadows for the pun.)

The recent attempts to dogpile and shame Frank Cho because of the ways he draws women are, of course, a part of the war on boobs that has swept up every nipple in creation. It's hit a peak right now, but it's been building for years. I first noticed people started making comments in geek conversations about how images of women with large breasts are inherently sexist. I can't describe how sickeningly awful that makes a well-endowed woman feel. I'd just gotten past feeling ugly and now I was evil.

The "helpful" suggestions to get a breast reduction followed, and those angered me. I didn't ask to have large boobs, but I should be able to feel attractive and proud and not pressured into painful, potentially dangerous surgery because I'm naturally proportioned in a way that doesn't match the latest politically correct fad. No matter what size a woman's breasts are, they should have a representation of beauty that they can relate to. Breast size shouldn't be connected to morality, intelligence, or the ability to find clothes that fit.

Again, yes, Ivy Valentine's costume is stupid. But it's another example of a form I took to be seen because I wasn't given a chance to be heard. No matter how many doors get slammed in my face, I can go to a convention and be relevant. Then pictures get out on the internet, and I get to watch the waves of communication happening. I can watch the ripples of the impact I have had.

In these times in my life, I used cosplay to communicate with myself and the world when I was being pushed down and shut out in many other ways. These successes in managing to matter helped my self-esteem immensely, but I can't say I feel "pretty" per se. "Pretty" to me is subjective, arbitrary, and kind of phony. But what I do feel is that I'm really damned good at finding a way to create value for myself in the world. Despite there being some people who would like me to accept that I'm a monster, I manage to take what I have and bring light and color and joy to the places I go.

That makes me feel good.

That's what cosplay does.