Monika Lee is delightfully nutty. She's like conversational lightning, and I couldn't help but find her exceptionally likeable, like the human version of champagne, or spicy food.

I could be totally wrong, but I still got the sense that the shy cosplayer type we all know well was still there in Monika. I've found that a lot of people miss that many attractive female cosplayers are extremely shy, because they're racing to label us "attention whores".

Cosplay appeals to shy people because it offers alternative communication channels for people who may not be gifted with strong verbal skills... there have been some fantastic cosplayers we haven't been able to feature because when they try to do an interview they look like we've sentenced them to death. They communicate in different ways. 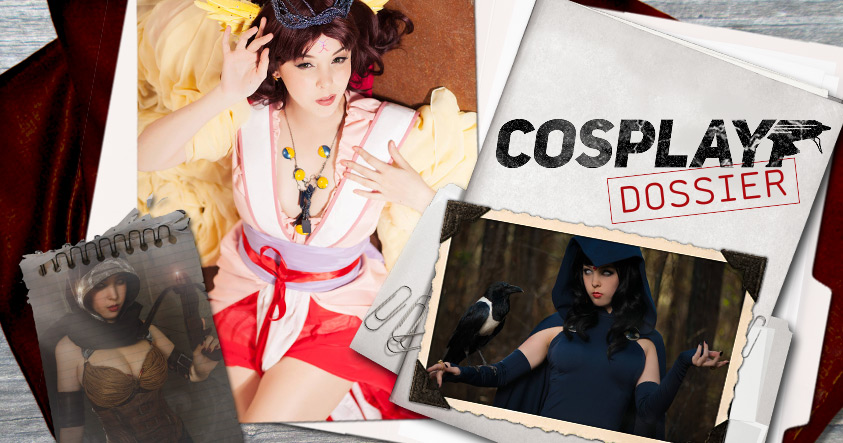 It's possible that this "cosplay free speech" principle is the reason so many cosplayers get enraged in the face of slut shaming, body shaming, or other activities - groping, internet mockery, and casting aspersions on the "manliness" of male cosplayers, for instance. These sorts of cruelties are attempts to drive a cosplayer away through shame... and I want to focus on the crap the guys get for a moment, because it often gets overlooked.

Cosplay gives guys increased license to be silly, artistic, and gentle as well as a hero in foam armor. So some male cosplayers get barraged with homophobic slurs. Male cosplayers also get touched without permission just as often as women, even possibly more often, but there's increased social pressure for them to "take it like a man" and not complain.

When I used to do mascot work, before cosplay had permeated popular awareness, a real concern was that spoiled idiots would come up behind me and smack the costume in the back of the head, a surprisingly painful process that transfers the entire force of the blow to your neck. Sometimes I'd take the mascot head off and these morons' laughter would turn to horror: suddenly it wasn't funny to hit me because I'm female.

There shouldn't be different personal safety and dignity standards based on gender, but there are. And I only know this thanks to costumes that made scumbags think I was a dude.

The unfortunate realities faced by men who wear costumes tend to get lost because they don't play out in the press. Obviously there's a much more visible issue regarding the strange mixed message the media sends out about sexy female characters. The most recent high level target is Quiet from Metal Gear V: The Phantom Pain. Articles condemning the design of Quiet's costume appear online, then the same websites do photo galleries of Quiet cosplayers with praising titles like "Hot Quiet Cosplay". What's missing are articles defending these maligned characters, to reduce the appearance of objectification. That... sucks. Yes, the photo galleries and op-ed columns are done by different departments, but there is an approval process and the various departments should talk to each other to avoid painful mixed messages. Cosplay sits at an intersection point in games: when you're talking about a cosplayer, you're talking about a fictional character and a real person with feelings at the same time.

I'm not saying that we should never be able to criticize an awkwardly-designed character, or point out that some of these outfits are silly. No one with a brain denies that Quiet's outfit is ridiculous, perhaps even deliberately so. My concern is that a message is being sent by allegedly progressive video game sites that it's still okay to sexualize a woman without first respecting her views -- including the characters she identifies with - if she's a cosplayer in a sexy costume. If a website is going to feature sexy cosplayers, it should take extra care regarding criticisms of characters based on sex appeal.

This sort of dissonant cosplay coverage is not in line with cosplay culture: it confuses cosplay with modelling. Modelling is a job that is inherently connected to selling a product - it's a business transaction. I don't care, as a model, that my hopes and dreams aren't included, because I'm being paid to sell a product like a mass media door to door salesperson. Cosplay, on the other hand, is a hobby connected to characters that are important enough to a cosplayer for them to want to embody them - it's self expression, and that means cosplayers deserve to be able to say what these maligned characters mean to them. Quiet, for instance, is a symbol for many of a triumph over adversity and trauma. If websites are going to act as moral gatekeepers regarding which female video game characters are "acceptable", then they should start paying cosplayers like models. Otherwise, these sites are exploiting a cosplayer's hard work to cynically play both sides of a click-based revenue model.

This element of media coverage of cosplay makes me uneasy, and it was one of the reasons I pitched Agents of Cosplay to The Escapist. Because The Escapist "gets it," I have the ability to facilitate other people talking about their cosplays in their own words. This means that even if someone else at the site can't stand a character, the cosplayers who dress as that character still have an opportunity to say why that character means something to them.

The Quiet cosplayers, after all, remind me that cosplay can be an act of subversion. Their beautiful, silent acts of mutiny show up the persistent gendered double standard in the very wings of the games press that complain about sexism in the games press. The bright side is these sites are right that sexism exists. The dark side is that they're actually part of the problem because they're profiting off pictures without also giving space to the philosophies and opinions behind the costumes. The problem is that you tend to get denied a voice when you're "pretty", because too many people still assume that pretty equals stupid.

Gamers know that if there's a weapon in your inventory that you never use, there's a structural design issue in the game, so telling women not to use attractiveness to our advantage because other abilities we have are so comparatively undervalued indicates that, in gamified terms, the balance of the enthusiast games press is off. We need to solve this issue by fixing the game balance, not by taking away a weapon that's fun to play with. We're gamers. We should instinctively get this.

I've kicked down doors and vaulted over walls, and now I have a chance to show all the different kinds of beautiful and amazing people that cosplay. Yeah, I used a chainmail bikini and push up bras to do it. I could. I don't want everyone to have to do things the way I did, but I'm not going to apologize for taking the opportunities that came to me: cosplay is about embodying characters that help their friends, beat up dudes, save the world, and maybe even get rescued in a way that rarely happens in the real world, so I'm not going to feel bad that I'm living that experience.

I'm very happy that the Escapist lets me show all the things cosplay is and can be from an insider perspective. Cosplay is a form of expression, and sometimes people want to express something other than "I'm hot"... but that doesn't mean we should remove the freedom to be brazenly sexy when we want to be. Freedom means just that: freedom. It isn't only free when you personally approve.