There have been some rumors lately that Disney is discontinuing any new Slave Leia merchandise. This, of course, launched a flurry of op-ed columns about why this is "good news", many written by men who have never worn the bikini. It made me feel like some scruffy looking nerf herders still regard Leia's metal bikini as something primarily for male enjoyment.

I've actually worn that bikini. In fact, if you remember a certain Slave Leia contest from 2008 on G4's Attack of the Show,that was me as the winner. And sorry laser brains, you may like it, but I wear that costume for myself.

Leia's metal slave bikini is, to me, a part of Star Wars that is far more complex than just an image, and I wanted to provide a counterpoint as someone who not only owns a metal bikini, but as someone who was also alive in 1983 to see Return of the Jedi in first run theaters.

I get why Disney would decide to hide the bikini away for cynical business reasons. It's not worth fighting the morality police Sith Lords that threaten to Force choke anyone who violates their oddly arbitrary chastity rules. But human trafficking and sexual slavery are real things that happen to real people, and bubble wrapping media for those more fortunate is not going to take away the real world problem of women who are forced into sexualized acts. It's very important that stories exist of people coming back from those situations, because people need symbols to emulate to help them in their own fights to reclaim their dignity.

It's also important to contextualize the slave bikini as being directly connected to the equally famous image of Han Solo helplessly trapped in Carbonite. Leia is captured and forced into slavery after rescuing him from that fate, and he was just a test run for Vader's real prize - Luke Skywalker. How emasculating! How dehumanizing to the every man! Why is there no outcry about retiring the image of Han in that helpless state? It's disposable male syndrome on screen! Women in Refrigerators, meet Men in Carbonite!

For the humor impaired, that was a joke.

But it's serious stuff that Jabba's pervy desire to keep a woman as a prize was his undoing. It allowed Leia to get close enough to him when all hell broke loose to choke him with the very chain that held her captive. This was the powerful second wave feminist metaphor that audiences connected with in 1983, and it says a great deal that this message has been lost in the ensuing thirty years. 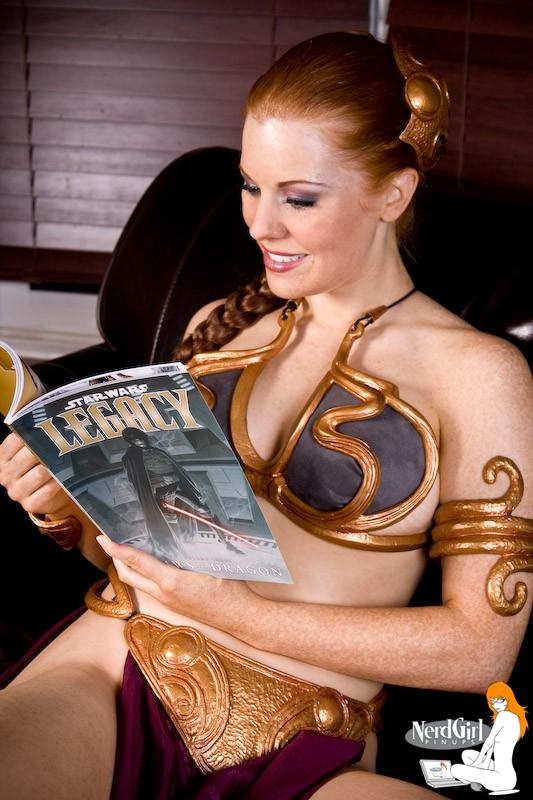 I still remember what it felt like to see that in the 1980s though. The metaphor of choking the slave master with his own chain is at the core of why I chose to wear Leia's metal bikini. It's a huge part of the reason it makes me feel beautiful. It's a reminder to me that I still have power even when I'm being dismissed as a bimbo. Again.

Carrie Fisher was only slightly less important to me than Yoda and R2-D2 as a kid. She was one of the few female icons of the 1970s and 1980s I felt I could emulate. Then she became a writer and comic, struggled with addiction and mental illness, was honest about it, and is basically a giant badass. She's still who I want to be when I grow up.

Linda Carter, Farrah Fawcett and similar stars were too smiling, had edges that were too soft. They appeared to exist in rarefied air. Princess Leia had a fierceness that I felt was more like the rest of us. She barked orders, flung insults, and was that dreaded thing for women: bossy. Princess Leia was bossy. And in that slave bikini, she still had bossy in her eyes.

That's been my core feminist metaphor ever since. It was still in my mind many years later when I discovered Robin Morgan's landmark 1970 second-wave feminist essay Goodbye to All That. Goodbye to All That is brutally, savagely angry. One could even make a case that it's misandry. But don't think of the target of that hatred as yourself or the guys you know. Think of the target as Jabba the Hutt holding that chain. Many women are trained to sit primly at the end of some imaginary leash, so we have to get blindingly, irrationally angry before we'll take a risk and save ourselves from a dehumanizing situation.

Morgan described that moment like this: "There is something every woman wears around her neck on a thin chain of fear-an amulet of madness. For each of us, there exists somewhere a moment of insult so intense that she will reach up and rip the amulet off, even if the chain tears the flesh of her neck. And the last protection from seeing the truth will be gone."

Leia's moment of defining insult was that bikini. And the scene where she chokes Jabba is a moment in sci-fi cinema that has allowed me to overcome my own mental shackles. I think the reason that so many women love that outfit is because she finally fights back!

Thinking of Leia in that bikini throttling that slime bucket helps me to be brave, to fight down the fear of people more powerful than me, and to stand up and speak my truths. At six years old I saw my future in the fire in Princess Leia's eyes. I know I'm not the only little girl who did that.

Sure, different women have different reasons for wearing the Slave Leia bikini. Some might very well just be doing it for male attention. Who cares? That outfit, that scene, that film, and that franchise are more than that. Star Wars is a cultural phenomenon, and to censor a costume that is not just a part of Star Wars history, but part of second wave feminist history, strikes me as vaguely Orwellian. We were always at war with women in metal bikinis. Ignorance is strength.

Sadly, my last protection from seeing the truth is already gone, so my strength has to come from other sources. One of those sources is Princess Leia, including every damned moment of her story. So Disney can do what it wants, and counterfeit feminists can cheer the decision after it's been made for them, obeying their own slave masters without the fabulous outfit. But that scene in Return of the Jedi gave me too much for me to say goodbye to all that.

So I'm keeping my metal bikini, thanks.