Yoda is my favorite Star Wars character, and that's saying a lot because I love a ton of Star Wars characters. On a scale of bad-assery per square inch, however, no Jedi is more hardcore than Yoda. Yoda is one part ninja, one part self-help guru, and one part awesome alien of a species so secret George Lucas won't say where he's from. With the latest Star Wars film less than two weeks away, I thought some Yoda wisdom could be applied to cosplay. 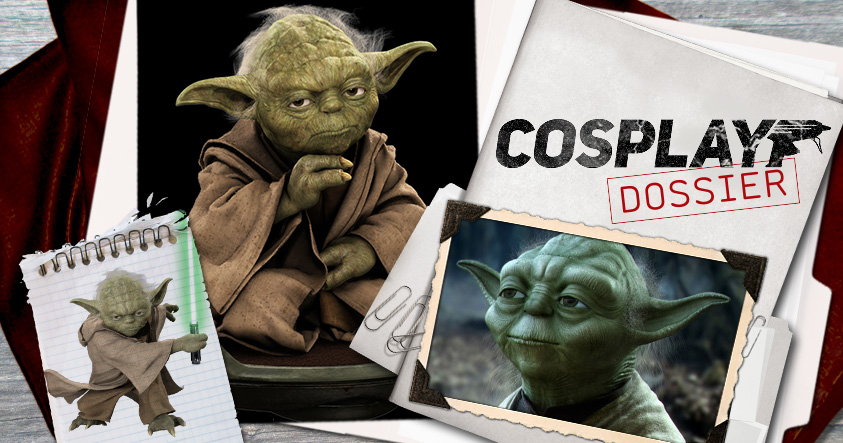 "Pass on what you have learned."

Some cosplayers like to be secretive, but most of us enjoy passing on tips, tricks, and stories. Sharing is part of the fun, but it also encourages us to keep innovating: giving away all our tricks means we need to keep discovering new ones! I prefer that cosplay be a communal experience, not a competitive one, which means sharing as much knowledge and assistance as we can. Jedi are supposed to avoid attachments, after all. If someone wants to copy a pose, I don't care. If someone wants to cosplay a character because I helped popularize it, have at it! I don't own any of these characters, so I have no right to be possessive of them, and imitation is the sincerest form of flattery. I even retire some costumes when they become too popular, because other people deserve to have their moment.

"Size matters not. Look at me. Judge me by my size, do you?"

Let's face it, we've all had at least one jerk take a swipe at our weight or the size of at least one of our body parts... usually ones that come in pairs. What we learn from Yoda is that haters gonna hate, but the last laugh is going to be on them. People should cosplay whatever makes them feel good, and not feel too limited by being short for a Storm Trooper. A huge distinction between modelling and cosplay is that the costume comes first in cosplay and we don't body shame, whereas in modelling, it's kind of a given that you're supposed to look like an emaciated freak of nature. Why? I don't know. I just know it is so. There are, however, people out there who still judge and don't know to keep their thoughts to themselves. They're the ones Yoda would smack down with a lightsaber if he wasn't such a good person.

I met a group of cosplayers in Chicago years back who became known as the "fat Justice League". The thing is, they knew people would probably make fun of them, but they loved those characters so much that they wore the costumes anyway. They related to the goodness of the characters, not their muscles. There are few motivations more pure than that. So keep Yoda in mind when you're feeling self-conscious about your body, because Yoda has mastered confidence.

Yoda schools the whole self-help industry with this quote. There's no "trying" to cosplay. You either cosplay, or you don't. The simplest costumes are still costumes, and if you need to start small to build up your confidence, go ahead and do that. "Trying" means that there's a part of you that's still tied to cynicism, and you're not really on board with the whole idea. How many times have you told someone you'll "try" to make it somewhere, because you know you're probably not going to show up? Be honest.

Hedging like this means you won't get the benefits that cosplay brings, because you'll feel unpleasantly self-conscious and act like a twit because you're trying to distance yourself from your own outfit. You can't step back from cosplaying with a dismissive "whatever". You have to own it. The reason cosplay builds self-esteem is you're stepping out of your comfort zone. That's not "trying" to do something. That's actually doing it.

"A Jedi uses the Force for knowledge and defense. Never for attack."

The internet is obsessed with criticism, but let's face it: many people just want to protect their right to be savagely cruel when they want to feel powerful. That's the path to the Dark Side. Most cosplayers want to continue to build their skills, and we want to learn as much as we can. But we also want to feel like our current work, on a limited budget, with limited time, is appreciated. So offer advice from a place of genuine enthusiasm for another cosplayer's work, and offer critique if you're asked for it... but critique in a way that provides positives as well as areas that need improvement.

Furthermore, don't be afraid to sincerely compliment other cosplayers. And if you hear other cosplayers running themselves down, offer honest encouragement. Everyone has to start somewhere, and everyone likes to feel accepted.

Oh and shower and wash your costumes! Because stinking is an attack on everyone's noses from which there is no defense.

"Fear is the path to the dark side. Fear leads to anger. Anger to hate. Hate leads to suffering."

People who say nasty stuff online are generally cowards. It takes way more strength to be kind than to be cruel, and people who take cheap shots from a place of anonymity have to live in fear of people even meaner than they are. If someone pisses you off or makes you feel bad, don't feel like you need to let them keep doing it: block or mute them and get on with your life. If you give the haters too much power over you, their anger becomes infectious and you end up attracting more and more of it. There's no real defense for picking on a cosplayer because we're not hurting anyone by playing dress up. Sure, we all want to give people a chance, hoping they were just misunderstood. But if you find yourself walking around angry or sad because of mean online comments, get rid of them. You have no responsibility to bear the brunt of some online troll's emotional purge. While any good Jedi still wants to see the good in those who turn to the Dark Side, some you just can't save.