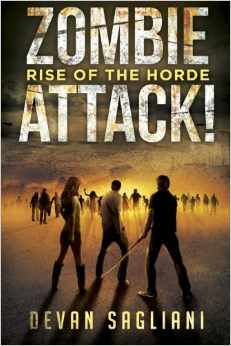 Zombies speak to me for a number of reasons. First of all, I honestly enjoy the idea of a mindless killing machine that cannot be reasoned with as the antagonist. It's truly terrifying to think that people you once knew and loved can turn into monsters that won't hear your pleas as they come to kill you. And yes I think they serve as a good release for those unspeakable parts of ourselves too. Whether we watch them tear apart another person, or we imagine that we are putting them down for good with a point blank gunshot to the dome, there is an undeniably cathartic response involved.

But the number one reason I enjoy writing about the proverbial "end of it all" (and the reason I believe so many people enjoy hearing about it) is that such a purging allows us the chance for a clamored-for fresh start. Put simply, zombie fiction allows us to start over and re-imagine the world as something other than what it is. It gives us the chance to be heroic and selfless, as well as the chance to quench our blood lust and anger at how unpredictable and unfair life can be. When we read zombie fiction we can be equally good and bad. We can explore the darkest recesses of our soul without being judged, but we can also praise those qualities we most admire in the people we look up to and try to emulate.

In my young adult novel Zombie Attack, the main character Xander Macnamara seems to be busy fleeing for his life at every turn. The book moves very fast with an insane amount of action happening in a very short period of time. If you're not paying attention it's easy to miss the way Xander is upholding the values he most honors despite the end of times. How his commitment to friendship, his loyalty to family, his compassion for those who are suffering cause him to put his life in jeopardy over and over again up until the very last sentence of the book. The book also pays tribute to those in the armed services who have sacrificed so much on our behalf. It's these qualities that show up when fans and critics talk about why they loved the book, far and above the also-present gory zombie action.

What I am suggesting is that it's not the killing, the lawlessness, the wanton lust for power and destruction that ultimately speaks to us about the idea of the zombie apocalypse so much as the chance it offers each of us to rise up and become the kinds of heroes we've always wished we could be, the kind we often can't risk being in real life. Sure it's fun to imagine being the bad guy, but not nearly as satisfying as the idea of being credited with saving the lives of those we love - or the whole of humanity for that matter! I believe that it's this selfless urge that compels us to love the genre. The idea of humanity uniting to overcome a series of grandiose and insurmountable problems threatening our extinction is far more powerful in my opinion than the urge to kill and plunder.

You can pick up a copy of Zombie Attack Rise of the Horde in any format (including Audible) from my publisher Permuted Press. In honor of the impending June release of the sequel, Zombie Attack Army of the Dead, The Escapist will also be giving away signed copies of book one. Enter to win below, or click right here!