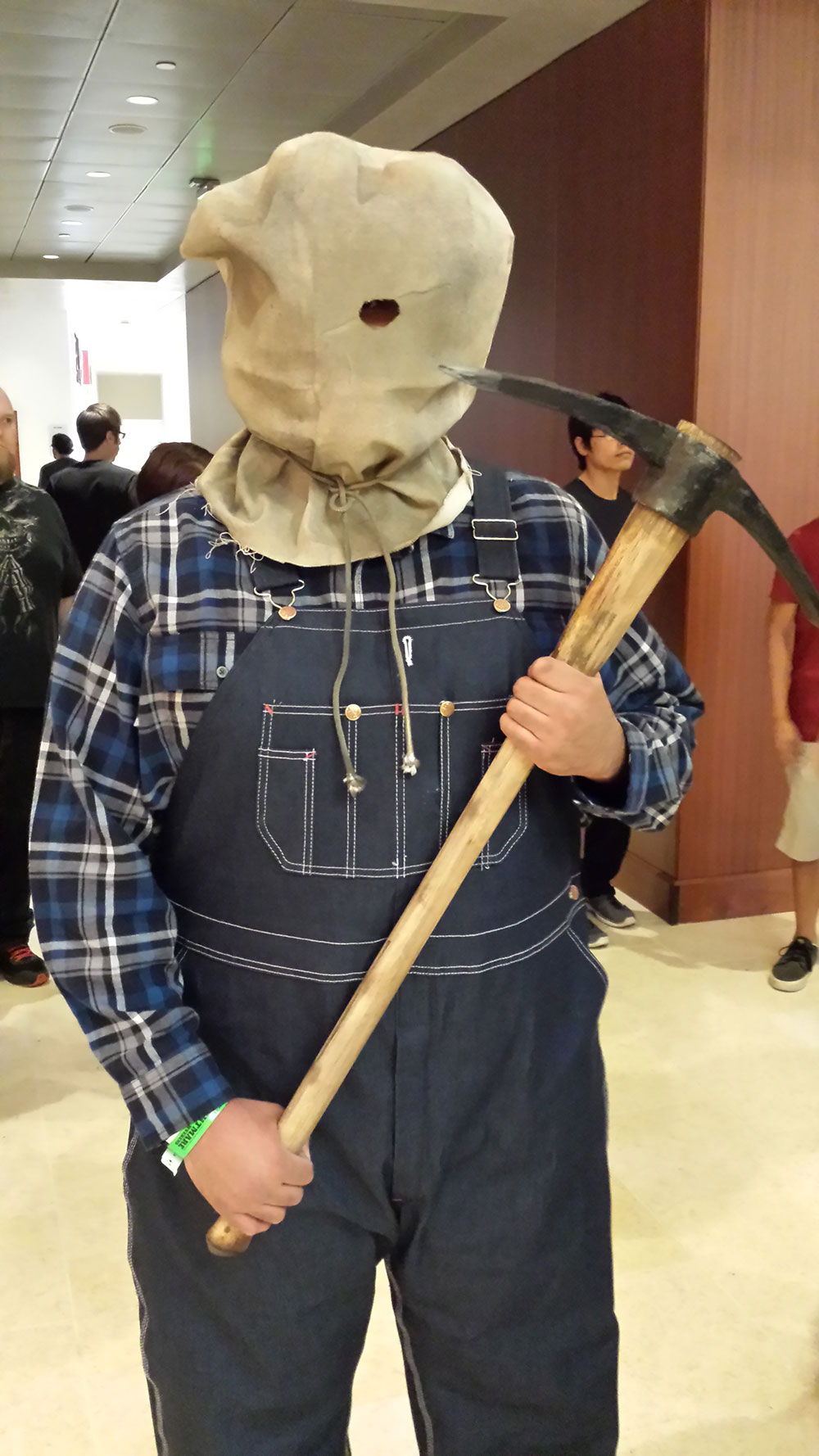 Texas Frightmare weekend was held this year the first weekend of May inside the Hyatt Regency DFW, down in the spacious conventions areas underneath the main part of the hotel, a severed heads throw from the sprawling DFW airport. Despite the proximity it's an easy place to miss if you don't know what you're looking for, the looping airport exits undulating like Cthulhu's tentacles as they twist through vast empty parking lots still under construction that eerily resemble a Hollywood backdrop for an 80's slasher movie. Think 'Nail Gun Massacre 6' or 'Power Tool Killer' and you'll get the idea. Short of cracking the Lament Configuration and reveling in the dour tones of hells bells as you cross dimensions, the best option for finding this hidden realm is a courtesy shuttle, a sentiment echoed by several locals who freely groused about getting turned around in search of the show.

Billed as the Southwest's premier horror convention and sponsored by Fangoria, the show boasted not only a Hellraiser reunion, complete with local horror legend Doug Bradley (better known as Pinhead to his adoring fans) but a host of other dark delights as well. There was a Terminator reunion of sorts (minus one notable former California Governor) and one for Children of the Corn too.

Tobin Bell of Saw franchise fame was charging $40 for his John Hancock and another $20 for a selfie. His line stretched across the room literally hundreds of fans deep. There were similar lines for zombie God George Romero, as well as Linda Blair, Linda Hamilton, and Chandler Riggs and Scott Wilson from The Walking Dead. Rock stars like Corey Taylor from Slipknot, Dee Snider of Twisted Sister, Ace Frehley from Kiss, Nivek Ogre of Skinny Puppy, and Twiggy Ramirez (formerly with Marilyn Manson) were on hand to pose with fans and sign autographs as well.

There were panels for everything from the Creature from the Black Lagoon celebrating its diamond anniversary (one fan drove in from Louisiana to get his poster autographed) to The Blair Witch Project to the original cast and crew of Night of the Demons. Robert Patrick showed up for the Terminator panel which was so packed with fans not even media could get in.

Horror movie screenings happened in separate halls while throngs of fans milled around the show floor meeting horror writers like Peter Clines and Tim W. Long who were on hand to sign their most recent books and buying custom terror themed memorabilia in the form of shirts, posters, dolls, and DVDs. There was even a tattoo artist from Los Angeles whose humming needle never ceased during the show floor hours.

Amidst all of this were the amazing fans, many of whom took it upon themselves to dress up as their favorite characters from Freddy to Jason to Leatherface. While a handful of these extraordinary costumes were the result of local businesses promoting their upcoming haunted attractions (including the spooky Goat Man's Bridge crew from Denton who easily owned this show with their fierce costumes) by and large the vast majority were comprised of zealous fans giddily exploring the dark side of horror cosplay. Some of them didn't even have a particular villain in mind, like the man with the black netted mask adorned with a horned skull whose gratitude could not be contained when I explained why everyone thought he was the Yellow King from HBO's True Detective - a show he'd never seen - or the man with the burlap sack on his head and a sharp pickaxe who I accidentally bumped into.

There were a surprising number of children as well, including the one featured on the SAW tricycle and another playing Carl wearing Rick's hat from The Walking Dead. Everywhere you looked costumed killers with blood stained clothes and actual weapons eagerly posed with total strangers for the honor of being immortalized in someone else's pictures. They were easily the best part of the show in my opinion. Take a look and let me know which ones are your favorites!