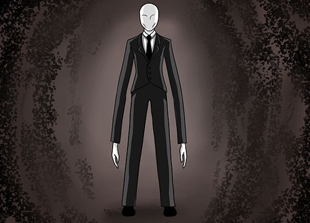 A deeper look into the misunderstood urban legend.

On the last day of May this year a pair of 12-year-old girls in Wisconsin invited one of their friends over for a slumber party, lured her into a game of hide and seek in the nearby woods, then took turns stabbing her 19 times with a kitchen knife. It's the type of thing you expect to see on Discovery ID or some other investigative murder porn channel programming, a lurid tale of youth gone bad. Let's face it in the age of the well-planned mass shooting stories like this are now all too common. What came as a real surprise was their motive. The victim, who miraculously survived after being discovered by a cyclist, was a school pal they bore no ill will towards. When asked why they decided to kill their friend, why they'd been planning the gruesome attack for several months they both gave the same answer: they wanted to impress Slendy.

Slender Man is a modern day urban legend birthed online. He's a true bogeyman for the digital age, one incubated on internet bulletin boards and reared through crowdsourcing from our collective nightmares. What started out as a contest in an innocuous thread in the Something Awful Internet forum in June of 2009 quickly took on a life of its own. Under the user name "Victor Surge" creator Eric Knudsen contributed two black and white images of groups of children, to which he added a tall, thin spectral figure wearing a black suit, spicing the images up with creepy captions taken from fictional witnesses to the abductions of groups of children. Knudsen named his creation, putting his stamp on this glossy new demon and sending him out into the world. In no time at all fresh images, videos, and haunting stories of the fictional creature began to flourish in the dark recesses of the web, growing like mold.

The internet had fallen in love with a new bad guy. They just couldn't stop talking about him. Soon people were drawing up elaborate histories of The Slender Man, connecting him with old myths from around the world that featured similarly disturbing accounts of child abduction and murder. "Slendy" as his fans affectionately refer to him, is still a work in progress being whispered into existence through a multiplicity of dark voices like a living ghost story with many different collaborators. 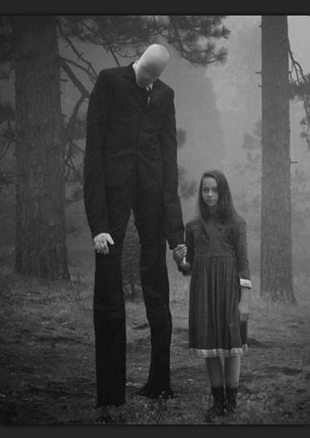 The lack of an official version of his roots, appearance, or motives often results in narratives that conflict to some degree or overlap with other familiar legends like the Tree People or even Jack Skeleton from Disney's The Nightmare Before Christmas. Creator Eric Knudsen says he drew inspiration from the old horror guard, including Stephen King, H.P. Lovecraft, and William S. Burroughs. In an interview with Know Your Meme Knudsen stated that his intention was "to formulate something whose motivations can barely be comprehended, [that triggered] unease and terror in a general population."

In addition to his unnaturally long proportions and dark Men in Black style suit and tie, the Slender Man also has long, tentacle-like arms which he uses to entrance and capture his victims with. In most accounts he is reported to gracefully hover rather than actual walk like a biped. His face is obscured as if it is made of cotton or gauze and he most often is imagined wearing some form of a hat. Not only can he teleport he is also capable of triggering what's known as "Slender sickness" just by being near him; a condition marked by the rapid onset of paranoia, nightmares, hallucinations, dementia, and nose bleeds. This special power allows him to lure in his victims, generally children and almost always in the forest, but not always. The Slender Man seems to get a perverse thrill from tormenting people who would expose him, stalking them down and driving them literally mad with his terrible supernatural gifts.

What makes this freshly spawned monster even more appealing to fans is his overwhelming visibility, a trait that seamlessly bonds him to the hearts and dark imaginations of the Selfie generation. Unlike the elusive Bigfoot or Lochness Monster the mythical Slender Man isn't camera shy. In fact he seems to enjoy being captured on film, generally as a blur in the distance standing near children who later are reported to have vanished. No one knows what he does with the kids he allegedly takes. Some say he murders them and hides the bodies. Others say he merely watches over them, transporting them to a sort of dark paradise he lords over like Charlie Manx's Christmasland. Which brings us back to the knife wielding hormone fueled would be killers in question.