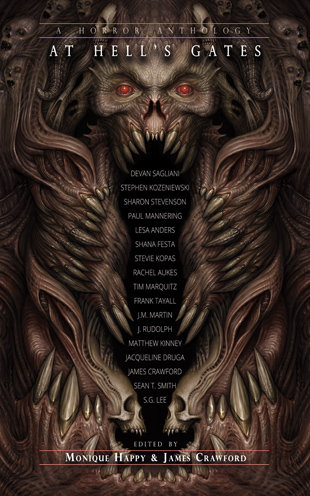 Devan spills the details about his new horror anthology, At Hell's Gates, and how the book will help the Intrepid Fallen Heroes Fund.

We all know zombies, vampires, witches, ghosts and demons can be used to thrill and excite, but can they also be used for good? It's a question I posed in my writers group shortly after I began looking for authors interested in collaborating on a new anthology. Why not pool our talents together, and resources, and use them to help other people?

Before long I not only had a list of willing authors, I also had two editors offering to pitch in. Soon we were voting on anthology names, tracking down cover art images, and deciding which charity was right for our group. At Hell's Gates was chosen as the title of our anthology by an overwhelming majority. I asked the writers interested in being part of it to give horror fans something truly meaningful by contributing stories set in their most popular worlds, either using familiar characters or offering new insights into previously published works. I also asked that the work they submitted be new, original, and that they give it exclusively to the anthology for the next year. Soon my inbox was flooded with a pile of fresh short stories, many as funny and poignant as they were terrifying and blood chilling. It was clear that I was going to have a very popular horror anthology ready to roll out before Halloween. Now all I needed was an organization to donate to that would do the most good.

It's a little known fact that by and large the community of zompoc readers and writers (that's zombie slash apocalypse for you civilians reading this, an official subgenre of horror that shows no signs of slowing) are pro-military. Many writers and fans are themselves veterans, including authors in our anthology. Some are still on active duty at present. It makes sense if you consider the nature of the subject matter since it often involves highly skilled warriors being called upon to battle the living dead and beat them back to grave. While the anthology wasn't just going to be about zombies the bulk of the stories submitted were coming in from popular zombie authors, a group known for their generosity and willingness to pitch in and help one another.

In the end we all agreed that the Intrepid Fallen Heroes Fund fit our philosophy best, because they cared not only for the brave men and women who suffered in the line of duty but also for the families of injured and deceased soldiers. Founded in 2000 The Intrepid Fallen Heroes Fund serves United States military personnel wounded or injured while in service, as well as their families. In 2003 The IFHF was established as an independent not-for-profit organization. Since then they've provided close to $150 million in support for the families of military personnel lost in service to our nation, and for severely wounded military personnel and veterans, all through public donations. You can learn more about this amazing organization and all the good they are doing in the world by visiting their site at http://www.fallenheroesfund.org.

With seventeen authors in the first volume At Hell's Gates features something for every fan of horror. Budding author, Shana Festa, shares insight into her Time of Death world with a hair raising tale of a nursing student caught in the zombie apocalypse. Stephen Kozeniewski provides both laughter and terror with his exploding shit zombies, leaving readers with a mental image their not soon to forget. Bestselling author Rachel Aukes takes fans back to her celebrated Deadlands with a riveting tale of survival. Frank Tayell unleashes his hordes upon unsuspecting survivors in Undead Britain. Lesa Kinney Anders and Matthew Kinney team up to remind us all that there will be no shelter from the coming zombie carnage. Paul Mannering enthralls with a fresh slice of Tankbread to keep the hunger for terror sated. James Crawford offers an eccentric, humor tinged approach to the rising dead with laugh out loud moments while Sean T. Smith waxes poetic in a harrowing tale that will leave readers stunned. Likewise authors Stevie Kopas, J. Rudolph, and S.G. Lee are sure to keep readers turning pages as fast as they can to find the answer to the age old zombie question: who will survive and what will be left of them?

It isn't just the undead that pass through Hell's gates and onto these pages either. Jacqueline Druga shares three different stories ranging from psychics to warriors to murderous housewives while Sharon Stevenson tackles vampires head on as they lure unsuspecting partygoers to their doom. Celebrated author J.M. Martin brews up a bewitching tale to keep readers spellbound, while Tim Marquitz turns in a wild ride with the spawn of the devil himself!

What started out as an idea for a single edition has now morphed into an ongoing anthology series, with four themed volumes planned for release in 2015. Horror authors on all stages of the journey of a writer from the fledgling self-published to those with big 5 titles and impressive credits, are encouraged to visit our site, http://athellsgates.com, and submit their works. We've also have a Facebook page.

At Hell's Gates Volume One is now available; you can grab your copy and help out a great cause right now on Amazon. Horror fans who don't use Kindle to read ebooks can pick it up in every other digital format by visiting the Smashwords page. At Hell's Gates is slated to release in print before Halloween.