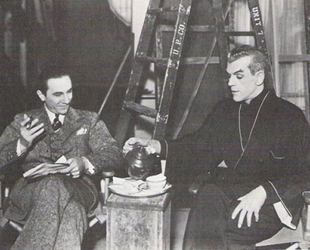 One year later they were teamed up again in a movie called The Raven, in which a mad scientist mercilessly tortures a gangster. Karloff, originally set to play the mad scientist swapped roles with Lugosi at the last minute. Bela was grateful to have a chance to show off his acting skills once more. He eagerly hoped to raise himself back up to full billing, instead of living in Karloff's shadow on the marquee, and increase his pay scale to where he felt it belonged. Unfortunately the film turned out to be too much for audiences, with its shocking mixture of lust and torture. In fact the movie was considered so disturbing that it caused the country of Great Brittan to ban American horror movies altogether for a period. Instead of being catapulted back into the limelight Bela was the star of a doomed picture. The Raven became an albatross around his neck that dragged his career further down while Karloff walked away from the movie virtually unscathed.

To make matters worse unlike Karloff who had from the start saved his money, expecting his run in horror to come to an abrupt end one day, Lugosi liked to live lavishly and was generous to a fault with other actors, musicians and artists. When the time came that he needed financial help himself Bela found he was on his own. Bankrupt and owing creditors all over town, Lugosi saw his roles and his pay shrinking up while being cast at second billing in Karloff pictures where his on screen nemesis was making considerably more than what he made. After the dissolve of the Laemmles with Universal and the British embargo on American horror films in 1936, Karloff and Lugosi found themselves in a career slump. For two years, horror films were out of the New Universal Studios line up. It looked like the end was truly near. 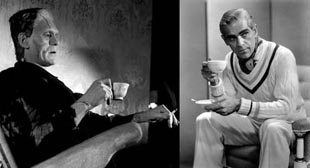 On April 5, 1938, a nearly bankrupt theatre in Los Angeles staged a desperate stunt by booking Frankenstein, Dracula and King Kong on a triple bill. The result became a phenomenon, and soon Universal decided to make a big budget Frankenstein sequel. Son of Frankenstein was to be Karloff's last time playing the famous monster. He was offered four thousand dollars for the role while Bela was given a small bit part and offered a meager five hundred for the use of his name. Knowing he needed the money the studio wasted no time in attempting to exploit the suffering Hungarian star. Having just lost his house Bela was in no position to argue and happily accepted the role regardless of the insulting salary. Costars Karloff and Basil Rathbone (who played Baron Wolf von Frankenstein in the movie after Peter Lorre fell ill and dropped out) fought with the studio to get Bela's pay increased. Karloff would later risk his career and his personal safety as a founding member of the Screen Actors Guild. Some historians believe his desire to stick up for the little guy came from being bullied by English classmates over his darker complexion, owing to mixed Indian heritage. 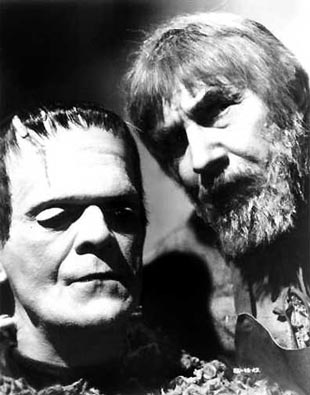 Director James Whale was in a slump almost as bad as Bela himself and publicly announced he was no longer interested in making horror movies. Universal hired Rowland V. Lee instead, who turned the focus towards more dramatic themes and made the monster duller than he had been in Bride of Frankenstein by taking away his ability to speak. He also reversed the studio's decision to release the movie in color after test clips revealed the makeup wasn't up to par and would be more comical than frightening to audiences. The film was a tremendous success, and Lugosi shined in his role as the affable, broken necked Ygor, stealing the show from Karloff with his unforgettable performance in a role he kept expanding. For the moment it seemed as if things might turn around for Bela, who seemed light hearted and jovial on set, joking to Karloff that perhaps one day their newborn children would marry and carry on the family business. Instead things quickly take another turn for the worse. Still the studio's darling Karloff snatched a role originally intended for Lugosi, leaving him nothing but a bit part instead. Bela fumed but unable to change his terrible luck. Karloff spoke perfect English which assured him an advantage over Hungarian born Lugosi, who struggled with his thick accent.

Soon afterward Bela took to heavy drinking as his career came crashing to the ground. Dracula was almost a decade behind him and the world of horror was changing before his eyes. The younger generation found horror campy and funny instead of scary so Bela attempted to cash in on the new craze by spoofing his earlier work. He took jobs were he was cast as the Dracula character in bad comedies and even tried his hand at playing the monster he once rejected in Frankenstein Meets The Wolfman but failed miserably. Lugosi felt like he was truly cursed. Meanwhile his nemesis Karloff was already doing what Lugosi intended to from the start, starring in a part written for him in a hit Broadway play called Arsenic and Old Lace. Boris played a homicidal maniac who, when asked why he committed the heinous act, responded "I killed him because he said I looked like Boris Karloff." Crowds roared with laughter at his self-effacing humor. Bela took over the role later when Karloff dropped out of the national tour, changing the line to reflect his name. While some critics suggested that he did an even better job than Karloff it wasn't enough to lift the veil of failure that seemingly hung over his career.