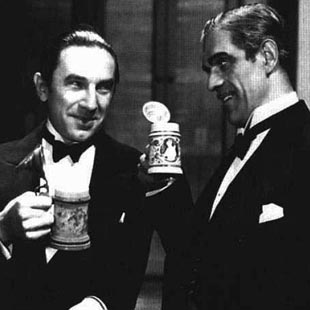 It's the most wonderful time of the year and to celebrate, let's look back on the two men who defined movie horror for generations.

Despite what some peppermint cocoa swilling, reindeer loving, fat man in a cheap red suit worshipping miscreants might have told you, Halloween is in fact the most beloved and anticipated holiday to ever be dreamed up - one full of terrifying thrills, ghoulish delights, and at the end of it all, sugary treats to appease the darkness in you and hopefully lull it back to sleep once more until next year. It's a time when all of the normal rules get flipped on their heads, children are encouraged to take candy from strangers, and people let the world know which dark fantasies lurking in their telltale hearts bubble up closest to the surface through their choice of slutty or blood drenched costumes - or in some cases both. This year as the leaves turn and the shadows grow and the great pumpkin begins his magnificent approach I wanted to take us back to the old school, the original roots of horror cinema, to explore the history of two of its finest princes who despite once being pitted against one another as rivals shared a shocking number of things in common.

Horror fans all over the world are familiar with names Boris Karloff and Bela Lugosi, or, as they came to be known in their most famous and iconic roles, Frankenstein and Dracula. Their images and the characters they popularized once chilled the blood of movie goers, quickening their pulse and sending shivers down movie goers spines, a fact worth remembering since today these same monsters are used to sell a wide variety of consumer goods including sugary cereal to kids in the form of Count Chocula and Frankenberry. Karloff and Lugosi were Hollywood giants who played a crucial role in establishing horror cinema, often starring together in titles, many of which went on to be classics. Boris was a self-effacing English gentleman who fought for social justice while Bela was charismatic and domineering, or as critics referred to him in his time "a Hungarian Valentino" known to leave ladies swooning. Their lives were forever intertwined by a chance act of fate in a cafeteria that led to the discovery of Karloff but whereas Boris soared ever higher into the type of fantastical life an actor can only dream of Lugosi's became a cautionary tale in nearly every sense. 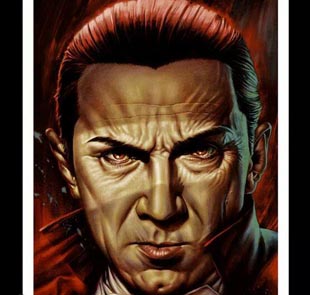 As times grew tougher for working class Americans they began turning towards the grand escape of cinema, showing up in droves for both the distraction as well as a cool, dark place to relax a spell and forget their endless worries. It was an environment ripe for monsters, with many normal folks already living in crushing poverty and fear. In 1929 America felt the full weight of the Wall Street crash and the onset of the Great Depression. Carl Laemmle, founder of Universal Pictures, was running out of money, like just about everyone else in Tinsel town. His son, Carl Jr, had glorious ambitions of taking Bram Stoker's timeless vampire novel, Dracula, and turning it into a lavish and unforgettable production that would make him a household name. He'd eventually manage the daunting task, but first he needed to convince his father he could do so on a budget. "Junior" Laemmle, as he was often called, had a reputation for going well over his original estimate that stuck with him through several studio hits, including Frankenstein and The Invisible Man, and ultimately ended up getting him forced out of the studio altogether.

Stoker's classic had been adapted for the stage by a British touring company and gone on to be an unexpected hit with theater fans. This version featured a well groomed, charismatic version of the Count, more palatable to London society at the time than a blood thirsty monster that transformed into a bat. Junior convinced his father that by using a smaller set and relying on dialogue to tell the story they could dramatically increase their production value while trimming costs. Now all they needed was a star to bring the story to life. Universal had their hearts set on using Lon Chaney, the famous man of a thousand faces for the part. That dream was dashed to pieces when shortly after as Chaney announced he had throat cancer. The search was on for a suitable replacement to bring the dark role to life. Surprisingly Lugosi, who had popularized the play with his dramatic renditions wasn't originally considered. He had to campaign for an audition and went to great lengths to get one.

Bela, who quite literally was born in the shadow of Transylvania in a small Hungarian town named Lugos from which he took his stage name, was the absolute embodiment of the famous blood sucking Count. To suggest that audiences loved him would be an understatement. In fact they often conflated his performance with Lugosi himself, which eventually led Universal to bill him using Dracula as his middle name! Lugosi's sensual and provocative performance married sex and death, embodying the very essence of the vampire mythos at its bloody core, and leaving audiences reeling by its borderline erotic portrayal. Fan mail begins to pour in from women taken by his exotic accent and piercing eyes who wished to become his next willing victim. The boy who had defied his father and run away to become an actor had gone from headlining in obscure Hungarian plays to being a literal household name. He was the definition of an overnight success, with reporters clamoring for interviews with the mysterious and laconic sex symbol.