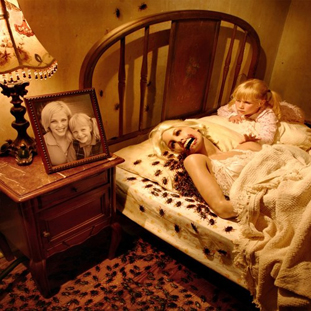 Joshua Hoffine is what you might call an evil genius with a camera. Born in Kansas and raised in Missouri, the gifted photographer studied English literature at Kansas State before veering off into his chosen profession as a self-described horror photographer. One look at his work is all it will take to chill you to the bone. It's the stuff of nightmares, drawn from the depths of the darkest corners of the subconscious. From monsters hiding under the bed to creepy clowns to ferocious predators leaving no escape from their evil intentions, Hoffine invites viewers to relive all their childhood fears embodied in meticulously constructed detail. Many of the images are presented from a child's point of view, capturing their innocence and vulnerability and adding to the creepiness. In some cases this is depicted with the subject seemingly oblivious to the lurking danger while in others the child is obviously and understandably terrified.

"I try to present the images within the visual grammar of a child," Hoffine explains on his official site. "I want the viewer to share their point of view, to feel their sense of vulnerability. The images stress danger, and depict a world where innocence and safety are under constant threat."

Hoffine uses friends and family members to create his ghoulish images -- including his own young daughters. He's caught his fair share of flack since entering the limelight for his portrayal of children but that hasn't stopped him from sharing his vision. For Hoffine real terror lies in what we cannot control as much as in coming to terms with our fragile mortality.

"I believe that the Horror story is ultimately concerned with the imminence and randomness of death, and the implication that there is no certainty to existence," Hoffine explains. "The experience of horror resides in this confrontation with uncertainty. Horror tells us that our belief in security is delusional, and that the monsters are all around us."

Hoffine's work has been shown in galleries all over the world. Last year he hit a new level of success when the internet began taking notice of him, with his work appearing in articles from the Huffington Post, Buzzfeed, and the Daily News. An active commercial photographer, Hoffine has shot various projects for personal clients, book publishers, record labels, and ad agencies. He's worked with a diverse client base that includes rapper TechN9ne, Sony, Living Dead Dolls, and Busch Gardens. Despite being very busy dreaming up new nightmares he graciously agreed to an interview with the Escapist.

Devan Sagliani: Where you always into horror growing up or was it something that you became interested in as you got older?

Joshua Hoffine: I've always loved Horror. I grew up watching scary movies, and reading Fangoria and Stephen King. But it was only as an adult, when Horror became a subject for my photography, that I began to consider it so seriously.

DS: People often assume horror artists have some dark secrets from their childhood that cause them to be interested in the genre. Were there any big moments that impacted you in this way or influenced your current choice of career?

JH: I had an idyllic childhood in small town America. I had happy loving parents and 2 younger sisters. My father coached my little league baseball team. My mom was a den mother in my cub scouts group. But my parents enjoyed Horror films and allowed me, as well as my sisters, to indulge a love for monsters and the macabre as if it was the most natural thing in the world.