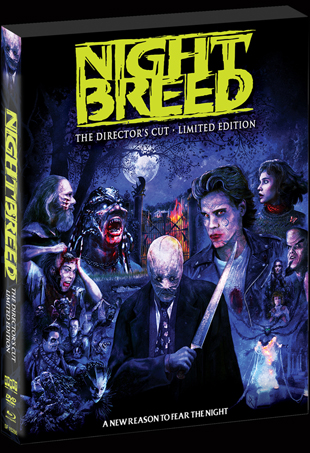 Devan attended the 25th anniversary screening of the horror classic. Then he got to hang out at Clive Barker's house because he's better than us.

It started with a random email that came in late on a Friday night. The subject line read CLIVE BARKER INVITES YOU TO NIGHTBREED. Tingles of excitement shot through me as I opened the attachment and read "Clive Barker invites you to witness a love story 25 years in the making. Seraphim Films & Century Guild proudly present a private screening of Nightbreed: the director's cut. Monday October 27th The Majestic Crest Westwood Theater." The invitation, a veritable golden ticket by horror standards, explained that there would also be a Q & A with Clive and some of the original cast after the show. The evening promised all the benefits of Con screening without any of the hassle. I was told some of the original Cenobites from Hellraiser, including Butterball, would even be in attendance.

In case you've been in a coma the last twenty some odd years Clive Barker is a living legend in the horror and fantasy community. An English writer who came to prominence from his early works, The Books of Blood, Barker would eventually be praised for his paintings and drawings, screenplays, comic books, and even a video game as well. The bottom line is the guy is a nightmare factory, cranking out beautifully dark images that continue to mesmerize and astonish us while making our skin crawl and showing us parts of our subconscious we're generally afraid to look at. Barker's style is so distinctive it's impossible to miss. Riddled with religious references, homoerotic sexual angst, and the marriage of seeming opposites artistically blended together, Clive's work takes us into the hidden worlds of fantasy happening right under our very noses. His sensual and unabashed approach to the supernatural luridly embraces dark fantasy and horror with such aplomb it's impossible to look away. Maybe that's why Stephen King once said, "I have seen the future of horror, his name is Clive Barker."

Clive's best known for his Hellraiser and Candyman films but Nightbreed, a commercial flop at the time of its release, holds a special place among horror fans and with good reason. Based on the short story Cabal about a man, Aaron Boone, who dreams of Midian, a mythological city in an abandoned cemetery somewhere north of Calgary where monsters live in peace with one another while hiding from the rest of the world. Through a perverse series of events set in motion by serial killing psychotherapist Dr. Decker (played by none other than David Cronenberg, adaptor and director of Naked Lunch) Boone discovers Midian and is ultimately inducted into their society by touching the blood of Baphomet, their protector deity. In the end a raging battle ensues between the people of the shadows and the forces that would exterminate them that leaves Midian demolished. Baphomet explains the city's fall was foretold and charges Boone with finding a new home for the Nightbreed, renaming him Cabal.

But the idea of the monsters being the real heroes was something that didn't sit well with test audiences of the original two and a half hour version. So Warner Brothers decided to make some alterations, starting with changing the title of the movie from Cabal to Nightbreed. Next they demanded an hour be cut off the show, causing the original editor Richard Marden to quit in protest. The film was eventually cut down to 102 minutes. Warner Brothers didn't know why the movie featured no big stars or why it had to be so violent so they began promoting it as a slasher film. The promotional materials like movie posters and television trailers radically misinterpreted the content of the film, according to the director. The MPAA rejected the trailer twelve times, forbidding any monster footage. Eventually the trailer was cut down to only show a man being terrorized by a razor. Barker was horrified to learn that the head of marketing at Morgan Creek never watched all the way through because it "disgusted and distressed" him. The people in charge of his baby didn't know the first thing about it. Not only had they not read Cabal they hadn't watched his feature. They didn't understand his vision at all, that Clive loved the monsters and believed that we feared and hated them because we envied their magical powers.

To make matter worse the studio argued that there was no point showing Nightbreed to critics because they earnestly believed that the people who went to see horror movies didn't bother to read reviews. Unsurprisingly Nightbreed was not well received by critics when it did come out. His original goal of making "the Star Wars of horror films" transformed into ashes before his eyes. What was to be the springboard for several more films that explored an entire universe would only be realized through a series released by Epic Comics that remained true to the original vision and spanned 25 issues. Nightbreed lay dormant, hiding in the shadows and seemingly dead like the very characters Barker had portrayed, until the fans began to resurrect it, quickly turning it into a cult classic.