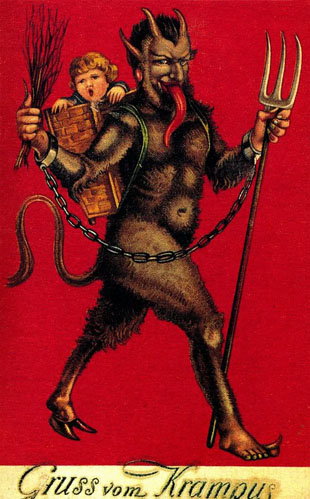 It's the most horrifying time of the year. Let Devan explain just why that is.

It's the most wonderful time of the year, again, a time when we look back and reflect on all that's happened over the last three hundred some odd days while stuffing our faces with delicious seasonal treats and fattening, overpriced beverages. It's a time when the economy gets a special push from the abject commercialism that's embedded itself so deeply into the holiday it can't be extricated without killing the host, a horror in and of itself if you happen to find yourself under the heel of class warfare. With sanitized versions of holiday classics featuring magical singing snow men and talking toys working overtime to save the spirit of Christmas (don't even get me started on the urban reboot of Annie) you may think that there is nothing dark and sinister about the Yule season anymore.

Allow me to disabuse you of that notion right now, by introducing you to Krampus the Christmas demon.

Krampus, whose name comes from the German word krampen, meaning claw, has huge horns on the top of his head, the kind that put the ones on Ignatius Perrish's head in the Joe Hill tale Horns to shame. He is covered in dark tufts of wooly untamed fur, and comes equipped with an intimidating set of fangs perfect for ripping into soft human flesh. The mythical beast is said to be the offspring of Hel in Norse mythology and shares distinctive traits with other terrifying, hell spawn in Greek stories, including his distant cousins fauns and satyrs, but this is no flute playing alcoholic pervert like Pan. This is a hell beast who lives to torment bad kids, and eat them. What's more Krampus comes with clanging chains and bells to let you know your unavoidable doom is in fact coming, a bundle of birch sticks to whip naughty children with, and a burlap sack to carry off the worst of the worst to the depths of the underworld where he will feast on their bones and relish in their tortured screams. So where exactly did this awesome monster come from? 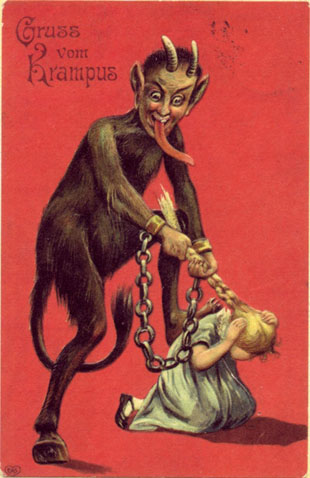 The birth of Krampus dates back centuries to Europe and has more twists and turns and permutations than a Gillian Flynn novel. The demons story begins way back with a 4th century Bishop named Saint Nicholas. Sound familiar? Legend has it that Saint Nick was a generous man who would wander the streets at Christmas time, starting in early December, tossing gold coins into the windows of the poorest houses in town. Over the next thousand years the legend of the jolly Saint Nick evolved, imbued with both elaborations, embellishments, flights of fancy, and a last but not least a healthy dash of pagan storytelling, which seemed to find its way into the best tales and legends like a worm digging into the delicate flesh of a fresh corpse. This fertile soil gave rise to the horned fiend, serving as a welcome demonic counterpart to Santa's generosity and kindness and allowing him to be all good and pure while someone else did the dirty work.

By the time of the Renaissance the seasonal holiday celebration of Christmas had evolved to include not just Santa Claus but the demon Krampus who was by then declared the evil twin of the beloved saint, and a willing partner in the holiday festivities. For generations parents in Germany, Austria, Italy, and Slovenia would frighten gullible children into behaving with lurid tales of the fierce and merciless winter savage. Good children who did what their parents wanted them to could expect to be rewarded with toys and treats come Christmas day. Bad kids on the other hand were in for a visit from the animal from the bowels of hell. For these rotten rule breakers and unrepentant instigators of chaos and backtalk a whipping was the best they could hope for.

It was the basket Krampus bore on his back they wanted to avoid at all costs, since being placed in it, or in the burlap sack, meant a one way ticket to eternal damnation and ghastly horror not even your parents could redeem you from. These days the sound of jingling bells is meant to signal the arrival of the jolly fat man in a red suit giving gifts, but back then such a sound would induce dread and panic, not joy and happiness, since it meant the demon was coming for you. And no one in their right mind would be singing about what fun it was to be "dragged off by a one horned monster to be slayed" if you catch my drift. I can only imagine the fun parents must have had playing tricks on unruly children back then by rattling chains near their doors and growling like wolves. Good times.