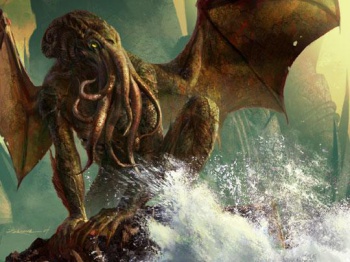 Originally appearing in 1928 in Weird Tales (the publication where Lovecraft did most of his publishing under his own name -- with the exception of Amazing Tales, an experience that left him feeling slighted according to later reports and only reinforced his opinion of writing exclusively for the former) Cthulhu is described as being part man, part octopus, and part dragon. H. P. Lovecraft describes him as "a monster of vaguely anthropoid outline, but with an octopus-like head whose face was a mass of feelers, a scaly, rubbery-looking body, prodigious claws on hind and fore feet, and long, narrow wings behind." He is hundreds of meters tall with human arms and legs but has tentacles ringing his terrible mouth.

He is considered a Great Old One within the pantheon of Lovecraftian cosmic entities. Lovecraft depicts Cthulhu as both massive and purely evil, which explains why those who worship him are generally insane cultists who crave the end of humanity. The malevolent entity hibernates in a state that is like being "dead but dreaming" within a fictional underwater city in the South Pacific called R'lyeh, which is known for its non-Euclidean architecture. There he remains imprisoned and dreaming of the day he will return to our world and wipe us all out. His deranged followers chant "Ph'nglui mglw'nafh Cthulhu R'lyeh wgah'nagl fhtagn" which translates into "In his house at R'lyeh, dead Cthulhu waits dreaming." Meanwhile the rest of us feel a constant subconscious anxiety as we blindly wait for this terrible fate to befall mankind.

Lovecraft even went as far as to create a detailed genealogy for Cthulhu which, was published later as "Letter 617" in his Selected Letters. Cthulhu appears in many of his other works in fact, including the short story "The Dunwich Horror" and "The Whisperer in Darkness," which hints that one of his characters knows the creature's origins by saying, "I learned whence Cthulhu first came, and why half the great temporary stars of history had flared forth." The 1931 novella At the Mountains of Madness refers to the "star-spawn of Cthulhu," who warred with another race called the Elder Things before the dawn of man.

Still, were it not for a close circle of writer friends, including August Derleth (Lovecraft's first publisher and close confidant) the great beast might have never made such a significant impact on modern day pop culture. Lovecraft encouraged other writers to take the monsters, aliens, Gods, and other creatures he created - including Cthulhu - and write their own stories using them. August Derleth and Clark Ashton Smith were just two of the numerous writers who continued to write stories inspired by Lovecraft's characters. In fact Derleth expanded on Lovecraft's vision by creating an entire cosmology which included a war between the Elder Gods and the Outer Gods. He also named the system of lore employed by Lovecraft and those who would follow in his literary footsteps, the Cthulhu Mythos, which is still very much alive today. Clive Barker, [A href="http://www.escapistmagazine.com/tag/view/stephen%20king?from_search=1&&os=stephen+king"]Stephen King[/a], Neil Gaiman, and hundreds of modern day writers continue to keep the slumbering monster alive by referencing Cthulhu or his lineage in their writings. Horror author CT Phipps (whose upcoming Cthulhu themed book 'Death May Die' is set to release from Ragnorak Publishing early this summer) captures the sentiment of authors still obsessed with Lovecraft's creation.

"People asked me why I write Lovecraftian fiction," Phipps admits. "I tell them that 'Call of Cthulhu' is a great metaphor for the struggles we humans have to go through in life. As much as we like to think we're in control of our lives, all manner of inexplicable absurd and utterly out-of-our-hands events happen all the time. Great Cthulhu is the symbol of that to me and others."

In my next column, I'll get into the dreaded fictional grimoire called the Necromonicon which explains the various forms the Old Gods take, including Cthulhu, and how to summon them.

Until then... stay scared!

Devan Sagliani is the author of the Zombie Attack! series, The Rising Dead, A Thirst For Fire, and the UNDEAD L.A. series. Devan also wrote the original screenplay for the movie HVZ: Humans Versus Zombies. Visit his website to learn more.