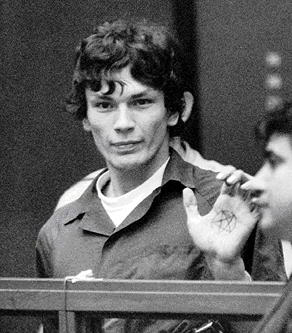 On Aug. 6, 1985, Ramirez drove to Northridge and broke into the home of Chris and Virginia Peterson. He startled 27-year-old Virginia before shooting her in the face. He shot Chris Peterson in the temple and attempted to flee, but Peterson fought back and avoided being hit by two more shots during the struggle before Ramirez escaped. The couple survived their injuries.

On August 8, 1985, Ramirez drove a stolen car to Diamond Bar and randomly chose the home of Elyas and Sakina Abowath. He entered the house and instantly killed the sleeping Elyas with a shot to the head. He handcuffed and beat Sakina while forcing her to reveal the locations of the family's jewelry, and then brutally raped and sodomized her. He repeatedly demanded that she "swore on Satan" that she wouldn't scream during his assaults. When the couple's 3-year-old son entered the bedroom, Ramirez tied the child up and then continued to rape Sakina. Then, Ramirez calmly ate a melon he found in the couple's fridge before leaving the home. Sakina then untied her son and sent him to the neighbors for help. It was the 13th Night Stalker murder and the police were nowhere closer to catching him. This was in part due to lack of inter-agency cooperation. LAPD didn't tell the sheriff's department what they knew. Neither did the Glendale police. The Monterrey Park police found a footprint at their crime scene that belonged to Ramirez, but didn't share that information with the detectives working the case. The police grew desperate as the killings continued and mounting pressure came in from the public to stop this deranged killer. At the same time news came in that the Night Stalker had struck again, this time in San Francisco.

Ramirez had been following the media coverage of his crimes and knew the police were eager to catch him so he'd headed to the Bay area but he couldn't stop his lust for blood. On Aug. 18, 1985, Ramirez entered the home of Peter and Barbara Pan. He killed Peter in his sleep with a gunshot to his temple then beat and raped before shooting her and leaving her for dead. At the crime scene Ramirez used lipstick to scrawl a pentagram and the phrase "Jack the Knife" on the bedroom wall.

When it was discovered that the ballistic and shoe print evidence from the Night Stalker crime scenes matched the Pan crime scene Dianne Feinstein, who was the mayor of San Francisco at the time, divulged the critical information in a televised press conference. The leak infuriated the detectives in the case, as they knew that the killer would be following media coverage and have an opportunity to destroy crucial forensic evidence. Sure enough Ramirez, who had been obsessively watching the press, walked to the Golden Gate bridge that night, dropping his size eleven and a half Avia sneakers and his favorite gun over the side and into the water. He remained in the area for a few more days before stealing a car and driving past Los Angeles to Orange County. 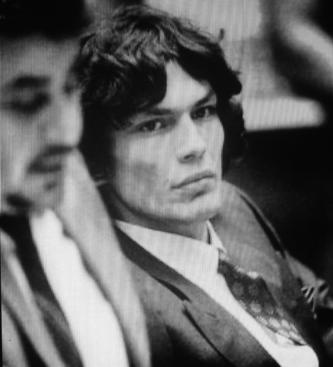 On Aug. 24, 1985, Ramirez drove 76 miles south of Los Angeles in a stolen Toyota to Mission Viejo where he broke into the house of 30-year-old Bill Carns and his fiance, Inez Erickson. Ramirez entered the bedroom of the sleeping couple and shot Carns three times in the head before attacking Erickson. Ramirez told the terrified woman that he was "The Night Stalker" and forced her to swear she loved Satan as he beat her with his fists and bound her with neckties from the closet. After stealing what he could find, he dragged Erickson to another room to rape and sodomize her. He then demanded cash and more jewelry, making Erickson "swear on Satan" there was no more - just like with his other victims. "Tell them the Night Stalker was here," were his last words the brazen killer taunted her with before leaving their shattered home.

But Ramirez had been unknowingly spotted. As he left in the Toyota, a 13-year-old neighbor, James Romero III, who had been outside fixing his bike, noticed the same "weird-looking guy in black" that he had seen earlier in the night. James thought he matched the police sketch of the Night Stalker or was at the very least highly suspicious, so he wrote down as much of the license plate as he could remember. Ramirez ditched the stolen car none the wiser and took a Greyhound bus to Arizona, completely unaware he'd left behind a crucial clue. Inez Erickson untied herself and went to a neighbor's house to get help for her severely injured fiance. Surgeons were able to remove two of the bullets from his head, and he survived his injuries.

When news of the attack broke, Romero told his parents about the strange man in the orange Toyota, and they immediately contacted the police and provided the partial license plate number. Erickson was able to give a detailed description of the assailant to investigators. The stolen car was found on August 28 and police were able to obtain a single fingerprint from the rear view mirror despite Ramirez's careful efforts to wipe the car clean of his prints. It had been a hot night and Richard had taken off his glove at one point then adjusted the mirror. California's new computerized fingerprint system was finally online. The print was positively identified as belonging to Richard Muñoz Ramirez, a 25-year-old drifter from Texas with a long rap sheet. Law enforcement officials decided to release a mug shot of Ramirez from a Dec. 12, 1984, arrest for car theft to the media. The Night Stalker finally had a face the public could fear and despise, but also identify. Police taunted the killer back, saying at a news conference "We know who you are now, and soon everyone else will. There will be no place you can hide."

The largest manhunt in the history of Los Angeles was underway. On August 30, 1985, Ramirez took a bus to Tucson, Arizona, to visit his brother, unaware that he had become the lead story in virtually every major newspaper and television news program across the state of California. After failing to meet his brother, he returned to Los Angeles early on the morning of Aug. 31. He walked past officers who were staking out the bus terminal in hopes of catching the killer should he attempt to flee on an outbound bus, but remained calm and drew no attention to himself. He walked a few blocks to a convenience store in East Los Angeles to buy some candy. After noticing a group of elderly Mexican women fearfully identifying him as "El Matador" - Spanish for "The Killer," Ramirez was shocked. He looked down and saw his face was on the cover of every newspaper on the rack and fled the store in a panic. He tried to get on a bus, but the people on the bus recognized him and began pointing at him and yelling.