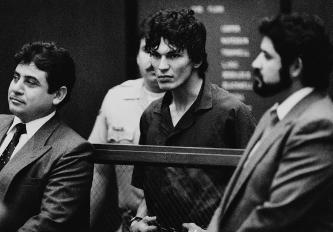 In the summer of 1985, Southern California was in the grips of a deep fear, held hostage by a bloodthirsty creature of the night, a ghoulish demon who cloaked himself in darkness to commit a series of gruesome murders. He wore all black and kept to the shadows, wrapping himself in the night and embracing his twisted inner darkness and inhumanity as something to celebrate. I was barely a teenager but I'll never forget the fear that the Night Stalker, as the media dubbed him, installed in the hearts of myself and virtually everyone I knew. It was all anyone could talk about, a real life horror story that caused a skyrocket in gun and ammunition sales and meant we all slept with our windows tightly shut and locked those insanely hot nights.

The Night Stalker would enter the house late at night and if he found a couple he would eliminate the male first, generally by placing a small caliber handgun to his head and killing him instantly. If the female victim didn't resist he would sexually assault her. If they did he would also torture and kill them. Then after robbing and ransacking the house he'd disappear. But unlike most serial killers, he would kill again soon, not having the patience to wait. Los Angeles quickly proved to be the perfect playground for a serial killer. The Night Stalker committed his crimes all over the sprawling city and surrounding areas, operating with impunity. He used the freeways to explore his dark fantasies throughout Southern California and even as far up as San Francisco. In what became a regular routine, he trolled quiet suburban neighborhoods searching for a dimly lit home in the dead of the night. When he found one to his liking he would case it before entering. He pried open windows, forcing his way in or in some cases trying the front door to find it unlocked.

What's worse the Night Stalker didn't fit the classic pattern of a serial killer. He didn't have a specific type of victim but preyed on the young and old alike. He didn't have a specific area he hunted in either, randomly selecting unrelated victims from all over Southern California. He also didn't have a single method of killing. He employed guns, knives, a tire iron, a hammer, a machete, and in one case even stomped a woman to death. What was even more peculiar was that he didn't always kill his victims. Sometimes if they pleaded he would let them live, forcing them to pray to Satan before he left. Because of this bizarre and random behavior it was nearly impossible for police to predict his next move and capture him. The question on everyone's mind was who was this madman and when would he be stopped? 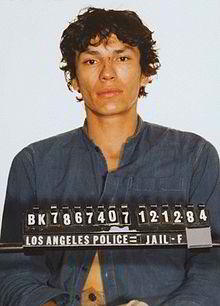 Richard Ramirez was born Ricardo Leyva Muñoz Ramirez on Feb. 29, 1960, in El Paso, Texas. He was the fifth and last child of Julian and Mercedes Ramirez. Mercedes was a devote Catholic. Julian, who had only a first grade education, grew up in Mexico where he met and married Mercedes in 1948. A former police officer, he took a job on the Santa Fe railroad when he crossed the border with his new bride. Mercedes took work in a boot factory mixing pigments and chemicals without the benefit of protective masks or proper ventilation. By 1959, she'd given birth to four children; Rubin, Joseph, Robert and Ruth. Rubin and Joseph were both born with birth defects. She was described by those who knew her as a kind and religious woman. Her fifth pregnancy with Richard was the hardest. The fumes were making her weak and nauseous. Doctors suspected her body was trying to reject the child she was carrying. But despite her sickness, she gave birth to a lovely and seemingly happy child.

When asked later what her son was like as a little boy Mercedes cried and said he was a happy child, always laughing and giggling and dancing to the radio. But childhood was not without dangers. At the age of two a dresser fell on him, causing a laceration to his forehead that took 30 stitches to close. At age 5, Richard was knocked unconscious by a swing at a park. He experienced frequent epileptic seizures that persisted into his early teens as a result of that injury. The attacks, which began in the fifth grade, left him paralyzed and humiliated in front of his classmates. Richard was also told he couldn't play football because of his seizures, a crushing blow to him as a kid. Other forces were shaping the future killer as well. His father Julian, a strict disciplinarian, had taken to beating Richard and his brothers with a belt when he misbehaved. Richard worried more for his brothers than he did for himself. His fathers temper was so volatile he even took his rage out on himself, once banging his own head with a hammer until he bled. As a young child, Richie escaped some of his father's brutality by hanging around his mother and big sister, who tried to reinforce his strict Catholic upbringing. He attended church regularly and was even an alter boy for a while. Yet despite his closeness to his doting mother and sister, Richard began to change as he approached adolescence, manifesting deviant sexual desires in part because of the abuse he'd received at the hands of a teacher that regularly came to his house when his parents were away, molesting his brother under the guise of tutoring him. Although Richard would never admit that he was sexually assaulted by the pedophile, his brothers insist that he was.

When he was 11, his older cousin, Miguel "Mike" Ramirez, a decorated U.S. Army Green Beret combat veteran he looked up to, began bonding with the impressionable Richie over weed and gory war stories. While in Vietnam Mike murdered Vietnamese women for fun, tying them to trees and then raping and killing them. He took pictures of them while they were alive, terrified and tied up, and also pictures of them after he'd killed them, often severing their heads. When he returned from Vietnam he brought a shoebox full of these photographs with him. He spent hours telling young Richard Ramirez about these stories and showing him the pictures. He taught him the tactics of guerrilla warfare, how to sneak up on an enemy and kill with stealth and certainty. One night while arguing with his wife Mike shot her in the head. Richard witnessed the entire episode, claiming he saw her fall in slow motion - a dime-sized hole in her head spilling blood. She was dead before she hit the floor. Mike was arrested, judged insane, and committed to a mental hospital.