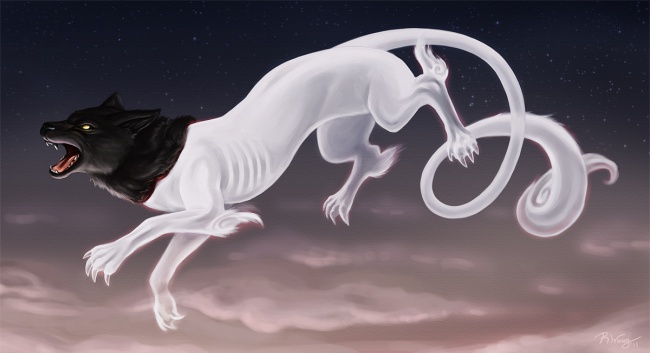 The fictional account on the previous page is an example of the types of supernatural folklore Japanese settlers brought with them to the culture of Hawaii, as well as a tribute of sorts to Glen Grant, who writes about various Obake or ghost stories in the islands of Hawaii. According to Glen when he published his own fictional account of an Inugami possession he was flooded with calls and emails from locals in Hawaii who reported having witnessed this phenomenon first hand or knew someone who claimed they had. It's safe to say that this little known belief in dog spirit possession is still alive and thriving in the islands today.

An Inugami is a mythical Japanese dog spirit generally used by a witch or sorcerer as a weapon against their enemies. Like the idea of a familiar in Western witchcraft, Inugami are loyal to their owners, who are commonly referred to as inugami-mochi, and serve them and protect them. Still legend makes it clear that they are wild spirits that act on their own instincts and occasionally turn them against their masters, in some cases possessing them as well or savagely biting them to death. Inugami are a form of youkai, a term that covers a wide variety of supernatural creatures that populate the world according to Shinto, the official religion of Japan which predates the modern era going back to the sixth century BCE. They are also considered their own class of Obake, since they are spirts that cause the sufferer to change shape. The word Obake literally derives from the Japanese word meaning "to change" - and generally covers the subset of youkai that includes shapeshifting animals and animate inanimate objects. 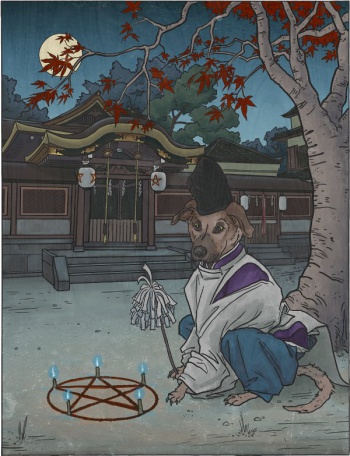 Originally found in Kyushu, Shikoku, and elsewhere in West Japan, reports of possession began cropping up in Hawaiian Islands shortly after Japanese settlers arrived. These Issei brought with them the superstitions of their homeland, which fit perfectly alongside Hawaii's rich traditions of spirits, ghosts, demons, and other supernatural myths. Evidence of Inugami worship exists stretching from Western Japan all the way down to Okinawa. Powerful sorcerers and witches were believed to have created the demonic spirits through ancient barbaric rituals then use them to commit heinous acts. Inugami are also known as In'game and Irigami in various local dialects.

The creation of an Inugami spirit is one of the cruelest and darkest practices known to man. The living dog is tied up and driven mad through starvation. The dog is then buried up to its neck, leaving the head fully exposed. The witch or sorcerer then places a fresh cut of raw meat just out of reach of the animal and beheads the dog as it struggles to free itself and satisfy its hunger. The head is then put in a special shrine. The creator then prays to the spirit and offers the severed head food to do their bidding. If the spirit accepts the offering they are bound to the summoner for all time. Enraged from hunger, the evil animal spirit will then possess the body of the witch's intended victim or torment the unfortunate souls who cross them. Inu no tatari, or the dog curse, is the most common form of possession, with the victim first falling ill, then becoming mentally imbalanced and exhibiting criminal behavior.

Folklore tells us that inugami-mochi, or owners of an Inugami, believe they will be blessed with good fortune, but that in many regions of Japan, it is also believed that the blessings bring with them the curse of being shunned by society and unlucky in love. That may have more to do with common sense though then superstition, since there aren't many people who would willing snuggle up to a professed sorcerer who tortures animals to gain power over their enemies. It's also believed that the Inugami will turn on their master if they upset it and may try to possess their body for stealing the dog's in the first place or savagely bite them to death. Long story short, it's a dicey proposition that not even your average black hearted dark arts practitioner would enter into lightly, if at all.