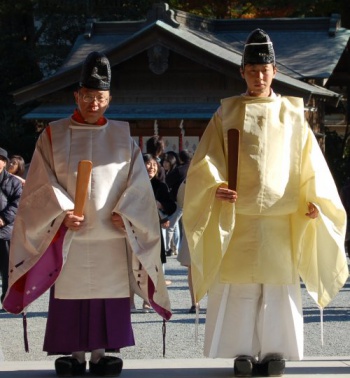 The technique for creating these dark spirits was originally passed down along bloodlines, which is why such families came to be known as Inugami-mochi. They usually kept their Inugami hidden in their homes under their beds or in the back of their closets to avoid arousing suspicion. It's unknown how the practice originally began, although rumors of a witch burying her prize hound still linger. The practice was outlawed over 1000 years ago during the Heian period, at the height of classical Japanese civilization, along with the use of all animal spirits as instruments of sorcery. If an inugami-mochi family was even suspected of bringing evil upon another family, the accused family member was forced to live on the outskirts of town, secluded from family, friends, and most importantly their aristocratic life. Even if the victim was eventually cured, the accused and all of their offspring for all future generations were forced to maintain their hermetic existence, separated from the rest of society as pariahs with their family name tainted forever for their misdeed. It is believed that families generally owned as many Inugami as there were members of the household, and when a new person became part of the family through marriage they were given their own. Inugami were treated like family members by their owners. They were believed to possess the power to bring great wealth and prosperity to their families, even though they occasionally brought ruin instead. 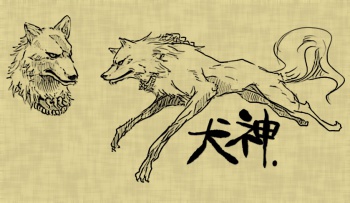 People who believe in Inugami today insist that they are beings of powerful emotion that can overwhelm and hijack weak or unstable people by entering their ears and settling into their internal organs. Some commonly believed signs of initial possession are chest pains and sharp pains in the extremities accompanied by a sudden and intense jealousy. Victims also are reported to exhibit dog like behavior including barking and a pronounced hunger that cannot be satisfied. Those who die while under the angry spirits' terrible spell reportedly show signs of an animal attack on their corpses within hours of passing, including bite marks and claw scratches. But it's not only humans that are susceptible to these accursed demons according to folklore. In some parts of Japan it is believed that cows, chickens, horses, pigs, and in some cases even inanimate objects can play host to Inugami.

The only known way to be cured of Inugami-tsuki is to hire another sorcerer or a Shinto priest or a Yamabushi to force the spirit out of the body (although some sources say eating a charred beast helps for some reason). This process takes weeks or months or more and is very unpleasant for all involved. Once cured of the dog spirit sufferers generally return to perfect health with little or no memory of the traumatic supernatural occurrence.

The bottom line? Next time you visit Waikiki, if you see someone crawling on all fours and barking like a dog, it's probably best to back away slowly from them. Sure they might be on crystal meth, but they also might be suffering the dreaded dog curse. And if you suddenly come down with the symptoms of Inugami possession or feel the irresistible urge to howl at the moon, eat raw meat, or bite a postman, I'd recommend you skip the time wasting trip to the vet and just head directly on over to Kotohira Jinsha-Hawaii Dazaifu Tenmangu, a Shinto shrine established in 1920 in the heart of Honolulu.