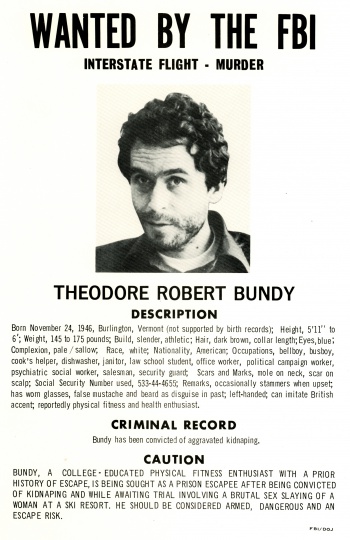 Of all the serial killers that have ever roamed the streets in search of victims few have ever reached the celebrity status that American serial killer Ted Bundy captured. In the 1970's he was responsible for the rape and murder of scores of pretty young women in several states including Washington, Oregon, Idaho, Colorado, Florida, and Utah. From his brazen killings to his dramatic prison escapes to his legendary court room antics as the former law student represented himself and cross examined survivors, Ted Bundy will forever be remembered as a brilliant and dangerous psychopath.

Before being executed in Florida's electric chair in 1989 the charismatic killer, kidnapper, rapist and necrophiliac confessed to at least 36 murders, but authorities believe he may have killed well into the hundreds of women whose bodies will never be discovered. His charm, good looks, and intelligence made him irresistible to victims, who he approached in broad daylight in public places, using a fake injury to lure them away or impersonating an authority figure. Once they were alone he savagely assaulted the helpless girls, raping and killing them. In many cases he returned to the scene of the crime and had sex with the decomposing bodies or cut their heads off and took them with him to violate in the privacy of his own home.

Biographer and crime author Ann Rule, a former friend who'd worked with Bundy on a suicide hotline, described him as "a sadistic sociopath who took pleasure from another human's pain and the control he had over his victims, to the point of death, and even after." Attorney Polly Nelson, a member of Ted's last defense team, put it even more bluntly. "Ted," she wrote, "was the very definition of heartless evil." So how did a cute kid turn into the most famous serial killer of all time?

Ted Bundy's mother Eleanor Cowell was unmarried and just twenty-two years old when she discovered she was pregnant. Her deeply religious parents adopted the boy in order to hide the fact he was an illegitimate child, telling him his mother was his older sister. His grandfather is described by those who knew him as a bigot who ruled his house with violence and threats, which might explain why a few years later in 1951 Eleanor moved with Ted to Tacoma, Washington. There she met and married Johnnie Bundy. Together they had several kids and a comfortable working-class life. Despite Johnnie trying to include him Ted never liked him, complaining that he was dumb and didn't make much money. Bundy later discovered his birth certificate and learned the truth about his mother. According to Rule he expressed a lifelong resentment toward his mother for lying about his true parentage and leaving him to discover it for himself.

From an early age Bundy displayed an unusual interest in the macabre, developing a fascination with knives. His Aunt Julia, Louise's younger sister, recalled one incident where she'd fallen asleep for a nap and woke to find she was surrounded by knives with a three year old Ted smiling down at her. Most of his upbringing Ted was described as a shy child who didn't get along well with his classmates but scored well on tests. By the time he was a teenager he'd developed a reputation as a peeping Tom, a habitual liar, and a kleptomaniac that thought little of taking things he desired from other people. He was arrested twice on charges of burglary and auto theft but later had the charges expunged from his record. Still despite these petty crimes there were still no clear signs of the terrible monster he would one day become, not at least until he went off to college. 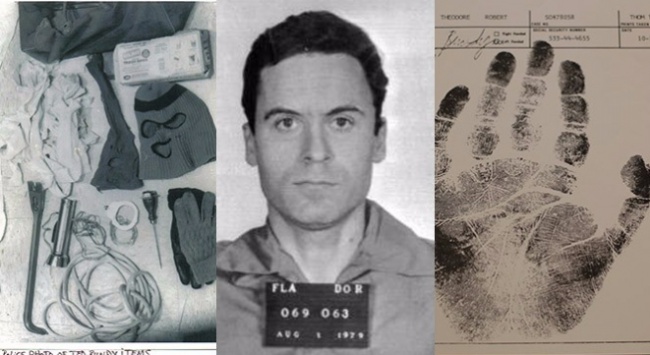 As a student attending the University of Washington, Bundy met and fell madly in love with a wealthy, pretty young woman named Stephanie Brooks from an affluent family in California . He was devastated when she broke it off, claiming he was going nowhere. Bundy worked hard to win her back over, pouring himself into his studies and into politics, a subject he was passionate about (over the years he was actively involved in the Republican Party and worked on several political campaigns). Many of Bundy's later victims would have eerie similarities to this college sweetheart; attractive girls with long, dark hair. Experts believe his brutal killings were an outlet for the seething rage he felt towards her.

Although there is still some debate when he started killing, but most sources say that he began his killing spree around 1974. By this time he had graduated from University of Washington with a degree in psychology and been accepted to law school in Utah. The Republican governor of Washington State had even written him a letter of recommendation after Ted worked for his campaign. It was around the same time that a number of pretty brunettes in the upper Oregon and Seattle area began to go missing without a trace. Soon stories were circulating about the victims last being seen in the company of a good looking young man who answered to the name Ted. With a combination of guile and acting, Bundy was able to lure his victims into his yellow VW bug and away to their deaths - often using their kindness to trap them and kill them. It wasn't long after the aspiring lawyer headed off to school in Utah in the fall of 1974 before gorgeous young women began disappearing there as well.